Overview
The already historic summer of 2015 ended with a meteorological curveball from Mother Nature, as a season of record heat concluded with a powerful, autumn-like storm. However, perhaps the major pattern change should not have been surprising, since such long-term environmental imbalances sometimes require a rapid course correction to facilitate a shift toward system equilibrium.

2015 was Prosser's hottest summer ever, as last year's record was shattered by more than one degree. The seasonal mean temperature was 3.7 degrees above normal, which is due mainly to the fact that June was by far the hottest calendar month (relative to normal) on record. June was actually warmer than August in 2015, which is only the second time that this has occurred. On June 28th, PK_McClenny reached a scalding 114 degrees during the second major heat wave of that month. By contrast, August was merely somewhat above normal, and pales in comparison to June and even July. The summer of 2015 is tied for the most above normal season on record, which is rather unusual given that winter tends to be a more variable season from year to year. Overall, the summer was hot, smoky, and dry.

Luckily, everything changed on Saturday, August 29th. The potent low pressure system that featured wind, rain, and cooler temperatures was notably strong for any Washington storm, but was especially impressive given the typically inactive and benign time of year, and was even more remarkable given the oppressive monotony of 2015 to that point. The regrettable impacts of the strong wind included power outages, blowing dust, and road closures. However, the merciful rainfall and cooling temperatures were welcomed by firefighters, and the air mass exchange helped to clear the smoke and improve the air quality.

A highlight of the storm included Anatone recording a 52.5 mph wind gust, which was their strongest since June 2008, and the strongest recorded at any AgWeatherNet station since May. Meanwhile, Tumwater SW recorded 1.4 inches of rain on August 29th, which was their highest daily total since March 15th, while East Olympia recorded a 15 minute rain value of 0.24 inches. At Pogue Flat (Omak), the high temperature on August 31st of 66.4 degrees was their coolest high (at that time) since May 13th. Despite the radical pattern change and unusually strong summer storm in late August, the headline of the season was certainly the unrelenting and largely unprecedented heat. 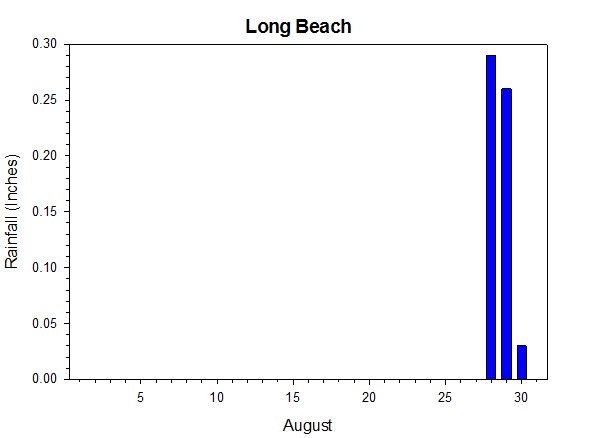 August Weather
Early August-Hot and Dry
Very hot weather at the beginning of the month eventually yielded to more seasonal but still warm conditions. High temperatures in central areas began August in the 90s and 100s, before falling into the 80s by August 5th.

Late August-Hot and Dry to Cooler and Stormy
Hot and dry weather for most of the period transitioned to much cooler and unsettled weather during the final 3 or 4 days of August. A potent storm passage on August 29th brought strong winds to Washington, along with locally heavy rain to western areas, while also ushering in a major pattern change. 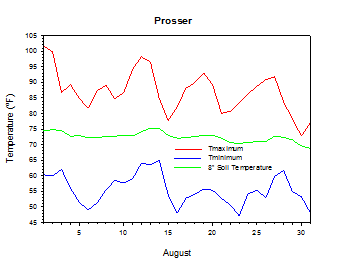 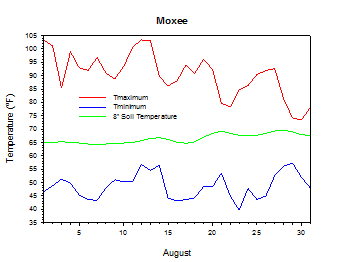 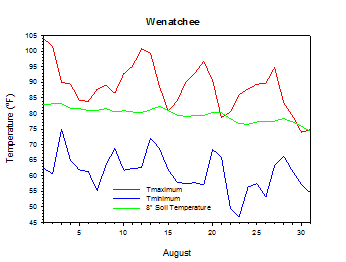 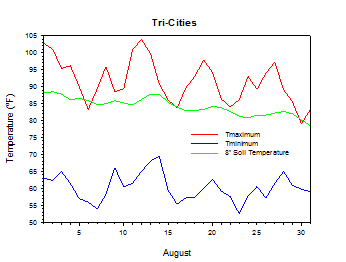 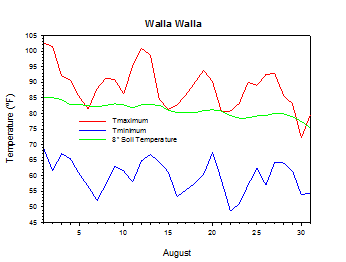 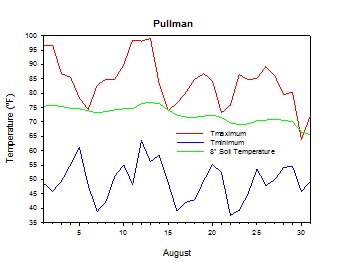 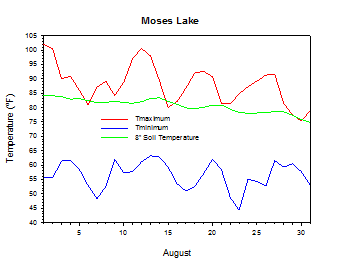 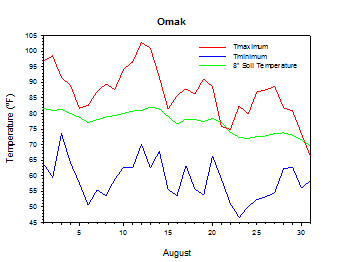 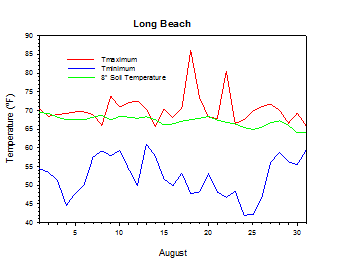 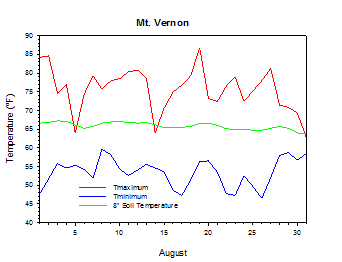 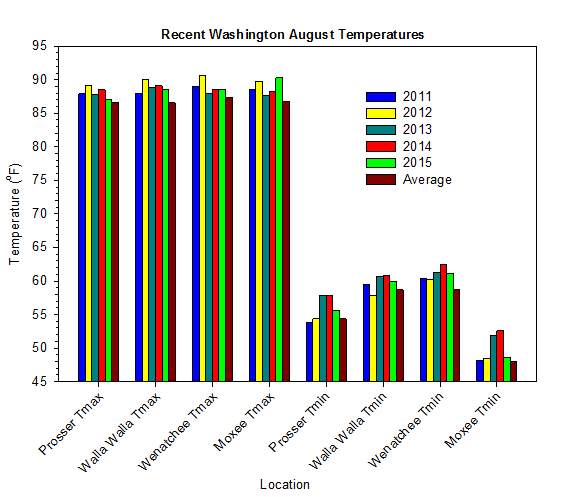 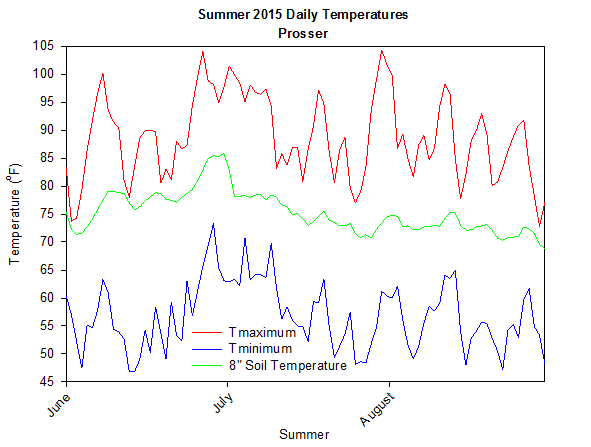 Summer Weather
June and July Review
June was an incredibly warm month. It was by far the hottest calendar month on record, with an unprecedented +8.1 degree departure from normal at Prosser, including +9.6 degrees during the day. Two major heat waves punctuated the scalding temperatures of June. Benton City reached 106 degrees on June 8th, and then PK_McClenny soared to 114 degrees on the 28th.

July was another very hot and dry month, as Mt. Vernon experienced their warmest month on record. Orondo climbed to 109 degrees on July 3rd, while Wahluke Slope recorded a low of 83 degrees. On July 9th, Whitcomb Island concluded a stretch of 14 consecutive days above 100 degrees. Although temperatures were scorching during the first ten days of the month, the heat subsided a bit for mid-July, and 0.83 inches of rain fell at Anatone on the 11th. The end of July was rather changeable. The temperature at Peshastin peaked at 105 degrees on the 19th. However, a cool storm passage sent the high temperature at Pullman down to 66 degrees on the 27th. In fact, July 26th was Prosser's coolest day, relative to normal, since January 2nd. By July 31st, the temperature at Benton City had warmed to 108 degrees. 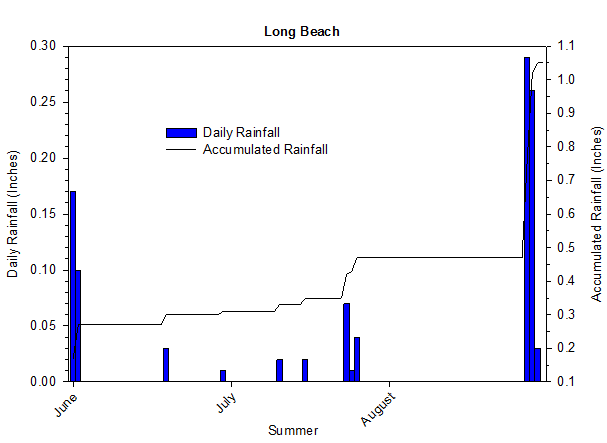 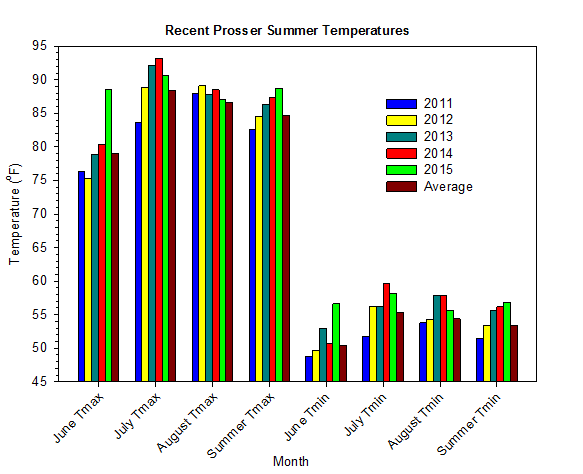 
Agriculture Report
Some wind damage was reported in corn fields in Skagit County as a result of the late August storm. Otherwise, apple, peach, and wine grape harvest continued in August. Most of the month was hot, dry, and smoky (National Agricultural Statistics Service).


This Month in History
On August 25, 2012, the temperature at Pullman dipped to 32 degrees.

Climate Outlook
According to the Climate Prediction Center (CPC), warmer than normal conditions are likely during the rest of 2015 and well into 2016, while drier than normal weather is somewhat likely for much of the coming autumn and winter. El Niño is currently strong, and is expected to peak, possibly at a record level, in the late autumn or early winter.