Second Warmest Summer On Record Ends with Warmest August Since 1991

Overview
Warm, warmest, and warmer is the best way to characterize the 2013 summer season. Dating back to the spring of 2012, it was the 6th consecutive season featuring near or above average temperatures at Prosser. However, this summer was unusually warm even by recent standards. To place the period into context, the +2.1 degree departure from normal was the largest positive seasonal anomaly to occur in more than 10 years (winter of 2002/2003). Overall, it was the second warmest summer on record, and featured particularly warm readings at night. June was generally balmy in spite of the rainfall in eastern Washington late in the month. July was hot and dry, as Prosser recorded the warmest monthly average high temperature (92.1 degrees) on record, while Mt. Vernon experienced only its second rain-free month. Meteorological highlights of the summer included 0.75 inches of rain at Prosser on June 18th, and a high of 108 degrees at Benton City on July 1st. The early July heat wave was the most severe in four years, and also the earliest major hot spell since 1992.

Aside from cool and somewhat unsettled weather during the first few days of August, most of last month was hot and typically dry. There were several minor episodes of isolated showers and thunderstorms sprinkled throughout the month which combined to bring at least light rainfall to most of the state. The most interesting weather events were the isolated and brief torrential downpours that periodically affected various locations during the month. A strong thunderstorm on August 1st dumped an incredible 0.63 inches of rain at East Wenatchee in just 15 minutes, while another storm on August 10th caused 0.79 inches of rain to fall at WSU Sunrise (near Wenatchee) in a 15 minute period. The rain-cooled high temperature of only 59 degrees at Green Bluff on August 2nd gave way to rapidly climbing temperatures thereafter. Hundred Circles reached 100 degrees just four days later on August 6th. The low temperature of 37 degrees at Pullman on the 21st was one of the few cool temperatures recorded during the entire summer.

Human and lightning caused fires plagued the state for much of the month, although weak weather systems at month's end helped to disperse the smoke and improve regional air quality. The first widespread soaking rainfall in 2 months graced western Washington on August 28th/29th, and delivered a much-needed 0.89 inches at Poulsbo South on the 29th. Unfortunately, more moisture was needed before the threat of fires would wane for the season across Washington. Overall, August low temperatures were the warmest on record at Prosser, thanks to an unusually warm air mass and periodically humid weather. 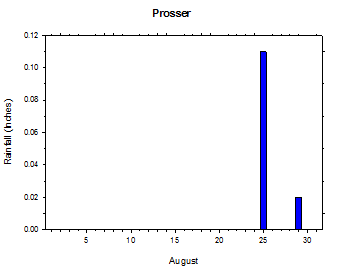 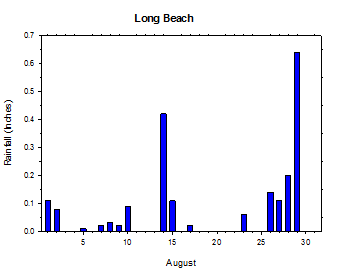 August Weather
Early August-From Cool and Unsettled to Hot and Dry
August began with very unusual summer conditions, as an upper level low pressure area spun slowly over the region. The resultant weather impacts included thunderstorms with heavy rain and gusty wind, as well as very cool high temperatures, especially relative to the rest of the summer. An incredible convective downpour led to 0.63 inches of rain at East Wenatchee in only 15 minutes during the late afternoon of the 1st. Of the total 1.21 inches of daily rainfall, most of it fell in less than an hour. However, the isolated nature of the event meant that some nearby areas received little to no rain! High temperatures only reached the 70s on August 1st in much of eastern Washington. More rain fell on the 2nd, with 0.88 inches falling at Green Bluff, north of Spokane. Cool day-time temperatures were highlighted by the daily maximum of only 59 degrees at Green Bluff, as many eastern areas peaked in the 60s. August 3rd was a warmer but still pleasant day. Though most areas were dry on August 4th, thunderstorms blossomed in the afternoon over the North Cascades and some adjacent east slope areas. Wenatchee Heights received a downpour of 0.45 inches in 15 minutes, and a daily total of 0.86 inches. Increasingly dry and warm conditions returned for the next week. High temperatures reached 100 degrees at Hundred Circles on August 6th, as low temperatures continued to range from the 40s to the 70s east of the Cascades.

Mid August-Stormy, Then Warm and Dry
Dynamic weather returned on the 9th and 10th in the form of scattered thunderstorms. Numerous sites east of the Cascades observed 15 minute periods of greater than a quarter inch of rainfall. In fact, late on August 10th, WSU Sunrise (south of Wenatchee) recorded an unprecedented 0.79 inches of rainfall in only 15 minutes. Otherwise, warm and dry weather was the rule for much of mid August, with many eastern areas climbing consistently into the 80s to mid 90s during the day.

Late August-Variable Weather
One of the few chilly mornings of the month occurred on the 21st, as the temperature at Pullman dropped to 37 degrees. Active weather made a comeback on August 25th, as an area of rainfall and embedded downpours passed through Washington. Finley observed a station record 0.21 inches of rainfall in 15 minutes. Many areas observed strong winds as well. The maximum gust was 48 mph at Mesa SE. Cloudy skies on August 26th held high temperatures in the 70s in the northern parts of eastern Washington. Light rain fell across much of western Washington on August 27th, with 0.18 inches recorded at Mt. Vernon. Rainfall continued on the 28th in western areas, including 0.39 inches at Puyallup. However, dry conditions and warm temperatures were the rule in eastern Washington, with readings as warm as 94 degrees at Roosevelt. Rain and muggy conditions persisted on August 29th in western areas. Poulsbo South, East Olympia, and WSU Puyallup all received more than 0.8 inches of much-needed rainfall, while Malott (near Omak) received nearly one half-inch. 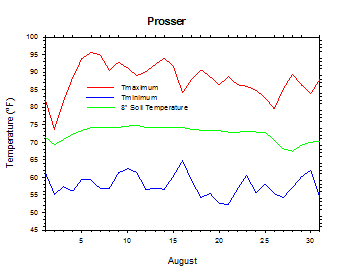 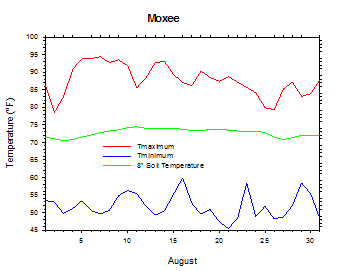 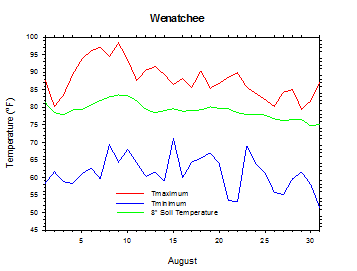 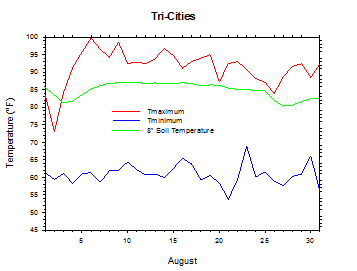 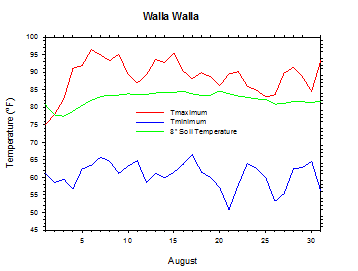 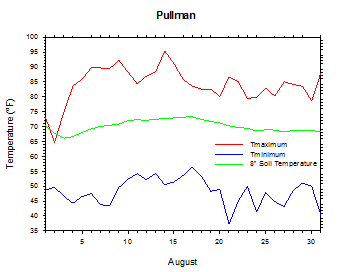 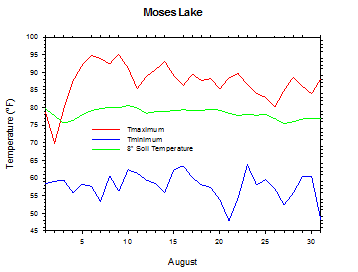 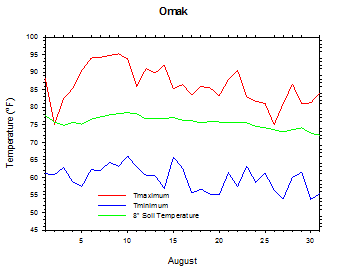 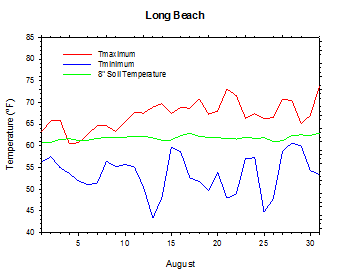 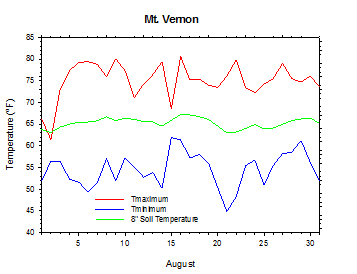 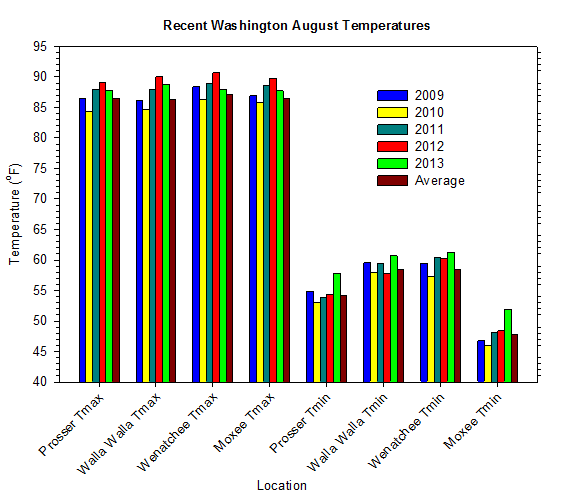 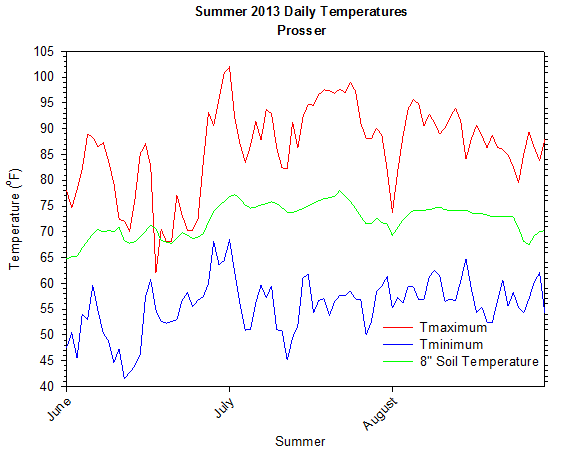 Summer Weather
June and July Review
June was fairly warm, but wet at times later in the month in eastern Washington. Moxee's average low temperature was 4.2 degrees above average, and the warmest since 1992. Overall, statewide temperatures were 1 to 2 degrees above average for the month, despite some cool daytime temperatures later in June in rainy eastern areas. Highlights for the month included 0.75 inches of rain at Prosser on June 18th, 1.3 inches of rain at Green Bluff on June 20th, and 100 degree temperatures in central Washington on the 30th. Unfortunately, cracking was a concern for many cherry growers in central Washington in late June.

July was characterized by extreme heat in the east, as well as extreme dryness in western areas. The heat wave on July 1st and 2nd sent temperatures soaring as high as 108 degrees in central Washington, with lows warmer than 80 degrees in some spots. It was the warmest weather in four years, and the earliest heat wave of that magnitude since 1992. In terms of day-time temperatures, July was the warmest month on record (1990 to present) at Prosser, with an average high of 92.1 degrees. Though overnight lows were above average to a lesser degree, it was still the second warmest month on record at Prosser, behind only July 1998. Many locations west of the Cascades received no rainfall during July, and Mt. Vernon experienced only its second precipitation free month on record. Not surprisingly, large fires and smoky skies were the main concerns during July. 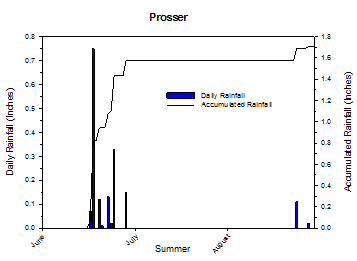 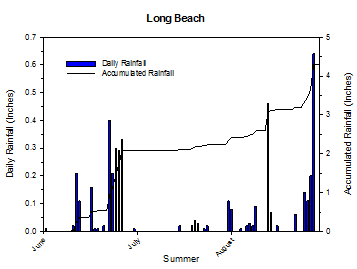 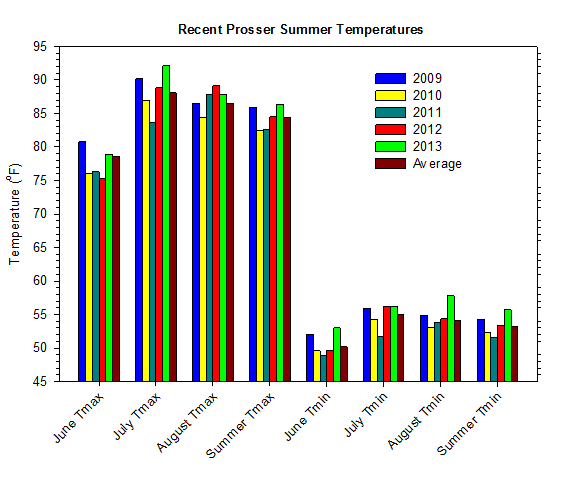 
Agriculture Report
As of August 25th, the winter wheat harvest was 90% complete, while seeding for next year was just beginning. Potato harvest continued in Walla Walla County, and Thurston County Christmas tree growers sheared trees for sale this year. In central Washington, gala apple harvest began, with reports of good yield and quality. In Whatcom County, harvest of most berry varieties was nearing completion. On August 10th, thunderstorms north of Wenatchee caused hail damage on some trees, while strong winds blew fruit off of the trees. Though unsettled weather early in the month slowed field work slightly, much of the month was warm and dry, with only a few periods of scattered showers and thunderstorms. However, the most significant rain of the month for western Washington came on August 28/29, with daily values approaching one inch in places. By the end of the month, the Yakima Valley Bartlett pear harvest neared completion, while Gala apple harvest continued, and early hop harvest began (National Agricultural Statistics Service).


This Month in History
On August 31st, 2008, the temperature at Moxee plunged to a monthly record low of 32.4 degrees.