A Summer of Weather Extremes Concludes with Hot Temperatures in August

Overview
The Good, the Bad, and the Ugly of northwest weather were all on display during Washington's summer of 2012. Despite a good ending that featured sunny and pleasant late August weather, much of the summer weather ranged from bad to downright ugly. From strong thunderstorms with heavy rain and large hail, to heat waves and raging wildfires causing smoke filled skies, a diverse spectrum of weather concerns confronted Washington over the course of the season. Similar to 2011, the summer of 2012 began cool and wet, and ended hot and dry. The significant rainfall in June left many people feeling as if we experienced too much of a good thing, while a mostly rain-free August left the parched and fire-ravaged Northwest begging for a welcome rain shower. Despite some similarities, the two summers were also different by several measures. The most striking distinction is the severe weather that affected Washington this year during the middle of July, which was absent last summer. The stormy period culminated with a thunderstorm outbreak on July 20th that led to locally devastating and yet highly variable levels of hail-induced crop damage in farms and orchards across central and eastern Washington. Some AgWeatherNet sites such as Sunnyside received record rainfall of nearly 0.75 inches in only fifteen minutes! The overall impact was a reduction of the apple crop expectations, although a significant yield is still expected. Overall, July of 2012 was much warmer than its 2011 counterpart.

Other notable aspects of July's weather include hot and humid conditions during the second week of the month that were punctuated by temperatures as high as 107 degrees. July 8th was unique because parts of central Washington received a rare rainfall on a day with high temperatures in the 100s. A cool, wet June was highlighted by several unusual events. An all-time daily record rainfall of nearly 1.5 inches occurred on the 4th at Station 2, located in Benton County between Plymouth and Paterson, just across the Columbia River from Oregon. In addition, the high temperature was only 48 degrees at Pullman on June 9th. High temperatures were at least 3 degrees below normal for the month of June, and Prosser (WSU IAREC) had its second wettest June on record. Overall, temperatures were around average this summer, although there was significant weather pattern variability during the season. While June was cooler and wetter than normal, August was unusually hot and dry in most places. The trend of the last several years that has featured cool conditions in the late spring and early summer transitioning to warm conditions in the late summer and early autumn continued in 2012.

August weather can be characterized by three words: sunny, dry, and hot. One of the most notable events of this month was the August 4th heat wave that finally delivered hot temperatures to the entire state, including the coast. Despite temperatures as high as 107 degrees in July in central Washington, coastal areas did not experience adequate offshore flow to allow the heat to reach its full potential until August. Temperatures on the 4th were as high as 101 degrees in Vancouver, even though the heat was slightly less intense in eastern Washington relative to the July heat wave. Many locations recorded temperatures in the 90s, including Olympia, Montesano, and Long Beach. However, the coast quickly cooled down the following day. By August 7th, extreme heat had reached eastern Washington, as Pullman recorded temperatures in the upper 90s. Two notable days of record conditions occurred at Prosser (WSU IAREC) last month. The 6th was the warmest August day on record, and featured an average daily temperature of 83.8°F. The low temperature of 69.1°F on August 15th was also a monthly record warm value. Overall, August began with consistently hot weather, and ended with more seasonal temperatures.

In spite of the dearth of extreme heat, high temperatures in much of central Washington were much hotter than normal in August due to a lack of any cool day time weather for the first three weeks of the month. By contrast, low temperatures were only slightly above normal. Most locations did not record any below normal temperature days until August 22nd. The theme during the final ten days of the month was more seasonal weather. The other big August weather story was the lack of rainfall and the associated fires. Most AgWeatherNet locations received no rainfall during the month. Pullman's last rainfall occurred on June 30th, and its dry streak reached 62 days on August 31st, while Moxee's last rainfall occurred on July 14th.

August Weather
Early August
August began with seasonal conditions that quickly transitioned to hot weather during the first weekend of the month. Offshore flow on the 4th caused what was by far the hottest weather of the year in much of western Washington, and especially at the coast. Highs were in the 90s in most places, including at the coast at Long Beach. It was the hottest weather at Vancouver since July 2009. Highs in eastern Washington were also very hot in the mid 90s to mid 100s. Sunday, August 5th was similar or even hotter than Saturday in some areas, although the coast experienced significant cooling and a return to more normal weather, as the flow turned back to onshore. More humid conditions entered the region overnight, which lead to very warm low temperatures. A few instability showers were triggered by a weak wave that passed through the region during the night and into the morning hours. However, very little thunderstorm activity occurred, and most of the rain was virga that did not reach the ground. The exception was a lone thunderstorm that dropped 0.17 inches of rain on Cowiche at around 3 pm on August 6th.

Mid August
Hot weather returned for the weekend of the 11th and 12th, with 90s to around 100 in central Washington, and 80s in western Washington. Slightly cooler weather on the 13th and 14th was replaced with extreme heat on August 15th. Wahluke Slope's low temperature was above 80°F on the 13th, despite the presence of dry air, while Pullman and Sequim had lows in the 40s.

The most significant environmental concerns of the period were the active wildfires. The destructive Taylor Bridge Fire near Cle Elum burned nearly 24,000 acres, while other small fires also burned around the Northwest. Strong and dry high pressure that was entrenched over the region made for high fire danger, while abundant smoke caused poor air quality. Northerly offshore flow caused very dry and hot conditions, as gusty winds aggravated the fires and blanketed eastern Washington with smoke. Highs were in the 80s and 90s across the state on Wednesday the 15th. August 16th high temperatures ranged from 97°F at Vancouver to 70°F at Long Beach. Highs were in the 90s across much of western and central Washington, and in the 80s in eastern Washington around Pullman and Spokane.

Late August
Cooling that had arrived at the coast on the 16th reached the interior of western Washington on Saturday, August 18th. Cooler weather finally arrived in eastern Washington on the 21st, as a breezy cold front moved through the region. Highs fell into the 80s, while lows dropped into the 50s, as a cleaner air mass replaced the thick smoke over the region. The front also delivered the first appreciable rain to any part of the state in a month, though most areas remained dry. While generally light and isolated in nature, a few areas in eastern Washington received a tenth of an inch or more of rainfall on the 21st. In the parched August conditions, any rainfall and cool air was beneficial to the fire danger, although gusty winds and a few lightning strikes also accompanied the rain and thunderstorms.

By the 24th, some areas of eastern and central Washington recorded highs only in the 70s, while widespread areas saw lows in the 40s. Temperatures on the morning of the 24th fell below 39 degrees at East Olympia and Tumwater SW. The low at Pullman on the morning of the 25th was a chilly 32°F, which was its coldest temperature of the summer. Warmer weather staged a comeback for the 25th and 26th, before cooler weather returned from the 29th to the end of the month, as high fell into the 70s and 80s east of the Cascades, and 60s and 70s in western Washington. Pullman had another cool morning on the 30th, with a low of 35 degrees. All in all, August ended with typical late summer weather that featured warm, sunny days and cool nights in eastern Washington, and periods of clouds and sun in western Washington. 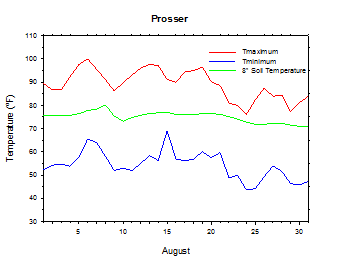 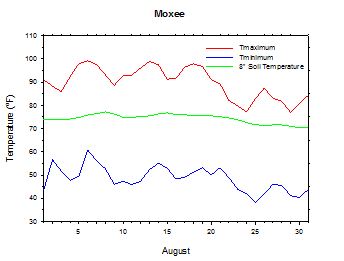 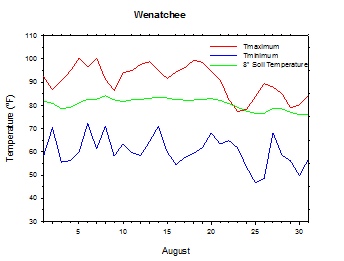 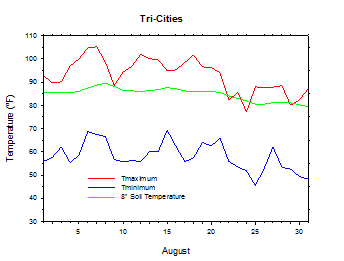 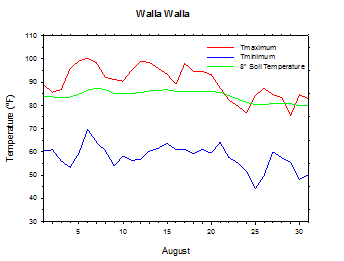 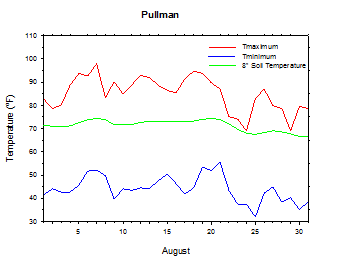 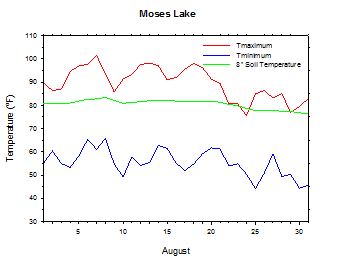 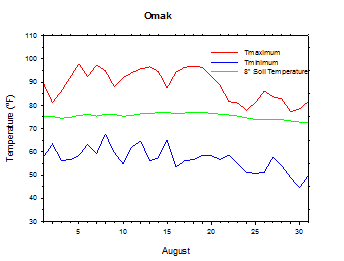 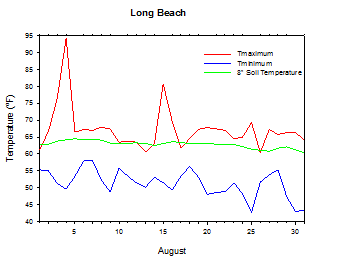 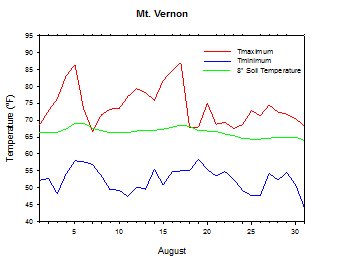 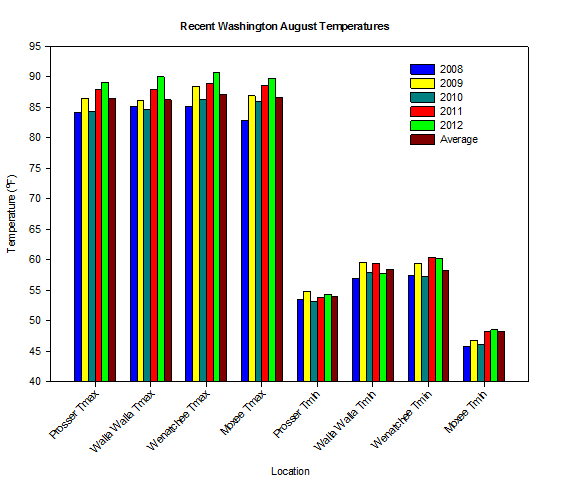 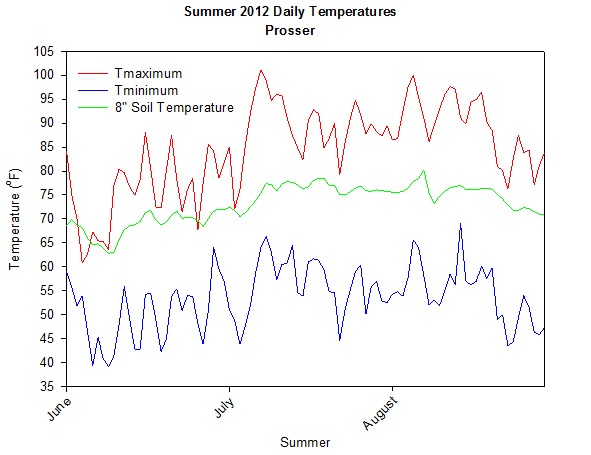 Summer Weather
June and July Review
The weather in June was cooler and wetter than average, while July conditions were slightly warmer and stormier than normal. June day-time temperatures were generally 3 or more degrees below average across Washington, while overnight lows were only slightly below average. Overall, Prosser (WSU IAREC) recorded the coolest June since 2001, and the second wettest June on record (1989 to present). Pullman climbed to only 48 degrees on June 9th, and Ritzville dropped to a frosty 31.7 degrees on June 15th. Station 2, located in Benton County, between Plymouth and Paterson, just across the Columbia River from Oregon, recorded an all-time daily record 1.46 inches rain on June 4th.

July temperatures were slightly above average east of the Cascades, and slightly below average in western Washington. July began with cool conditions that quickly transitioned to hot weather after the 4th of July. The subsequent heat wave brought temperatures as warm as 107.3 degrees, along with a record high temperature at Sunnyside of 104 degrees. July 8th featured an unusual combination of extreme heat and thunderstorms in the Yakima area. Some areas received significant rainfall after experiencing afternoon highs in the 100s, making it the hottest day with rainfall on record in places such as Mattawa. The middle part of the July was stormy and humid, as Washington recorded thunderstorms each day from the 14th to the 20th. Certain AgWeatherNet sites recorded heavy rainfall of around 0.75 inches in only fifteen minutes during strong thunderstorms. The culmination of the active weather was a severe weather outbreak on the 20th that led to isolated, devastating hail-induced crop damage. More seasonal weather occurred at the end of July. Overall, July rainfall was above normal but highly variable due to the convective nature of the month. 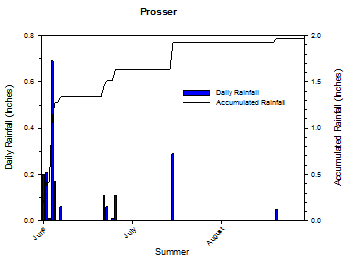 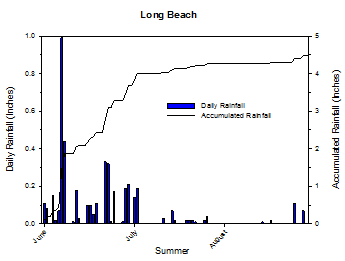 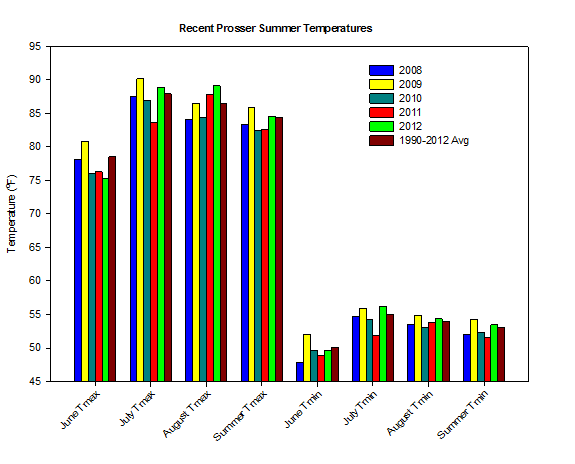 
Agriculture Report
A larger than normal portion of the cherry crop remained unharvested as of the end of August in Chelan County. Harvest continued of late maturing varieties of peaches, nectarines and Bartlett pears, while Gala apple harvest began in the warm sections of Yakima County. Hop harvest activity also began in the Yakima Valley. Winter wheat harvest was being completed in Lincoln County, while 30% of the spring wheat remained in the fields. Wheat yields were average in Grant and Ferry Counties. In Grays Harbor County, raspberry harvest finished while blueberry and cannery pea harvest reached its peak. Christmas tree growers in western Washington continued top working and side shearing the fir trees (National Agricultural Statistics Service).


This Month in History
On August 17th, 2008, the temperature at Wenatchee (WSU TFREC) climbed to a monthly record 106.4 degrees!

Climate Outlook
According to the Climate Prediction Center (CPC), drier than normal conditions are expected in September, especially in western Washington, along with near normal temperatures. These trends are likely to continue for the rest of the autumn, with warmer than normal conditions possible by the winter of 2012/2013. El Niño conditions will soon develop, and should persist through the winter, which suggest that a mild and benign winter is more likely this year.