Warmest Spring Since 1992 Ends With Warmest May Since 1993

Overview
The month of May marked the end of yet another abnormal season in Washington. In fact, the spring of 2015 was the warmest since the early 1990s. Prosser's temperature highlights from this impressive season include:

Interestingly, the low temperatures were particularly warm, which is indicative of the unsettled and somewhat humid conditions late in the spring. South central Washington was actually wetter than western areas in May, which represents a significant departure from normal conditions.

The non-temperature weather story of last month was the incredible May 13th rainfall in south central Washington. Much of the lower Columbia Basin from the lower Yakima Valley and Horse Heaven Hills eastward to the Tri-Cities and Walla Walla areas recorded in excess of one inch of rain, with isolated reports of more than 2 inches. The remarkable rainfall was widespread in the climatologically driest part of the state, and not isolated as would be the case with convective activity. Prosser recorded 1.37 inches of rain, which is an all-time daily record. The fact that this event occurred in May, rather than the cold season, is quite notable. The 13th was also a very cool day, with highs only in the 50s in much of south central and eastern Washington. In fact, temperatures seemed especially cool given the abnormal warmth of most of the month.

Earlier in the spring, March was nearly five degrees above normal at Prosser, and was the warmest on record. March 27th was an especially hot day, as Wapato reached a monthly record high of 80 degrees. However, several cool storms in early April brought wind, rain, and mountain snow to the region. The high was only 45 degrees at Garfield East on the 14th, and then Ritzville fell to 23 degrees on the morning of the 15th. However, the temperature soared to 83 degrees at Azwell on April 20th. Overall, April was only slightly warmer than normal and quite dry. 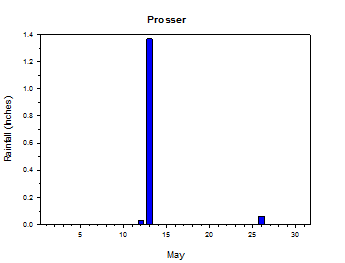 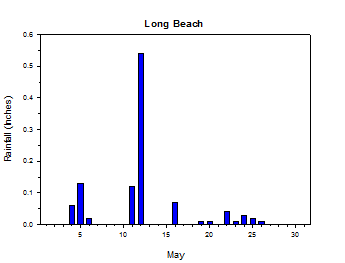 May Weather
Early May-Variable Conditions
May began with warm temperatures and rather dry conditions. Highs on the 1st were in the upper 50s at the coast to the mid 80s in parts of south central Washington. However, the low on the 6th was a chilly 29 degrees at Ritzville. May 6th was a cool, breezy and showery day, with a few thunderstorms. A trend toward warming and drier conditions began on May 7th.

Late May-Warm, With Isolated Showers
Late May was a warm and slightly unsettled time period, as occasional isolated showers were observed. The high temperature at WSU Tri-Cities on May 30th was 92 degrees. 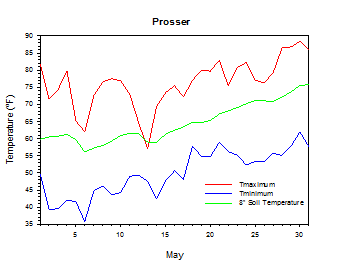 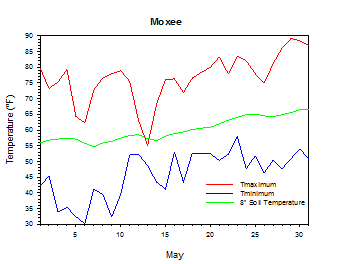 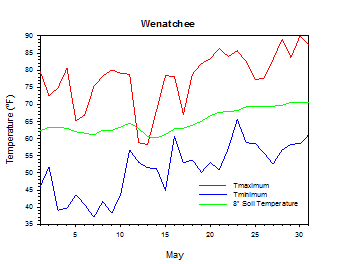 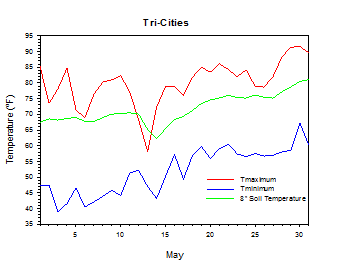 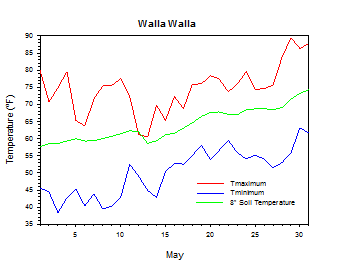 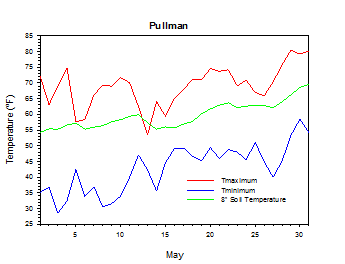 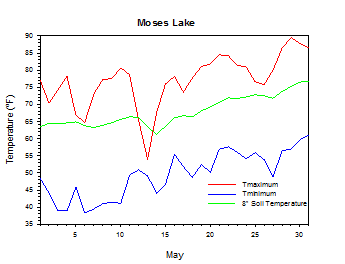 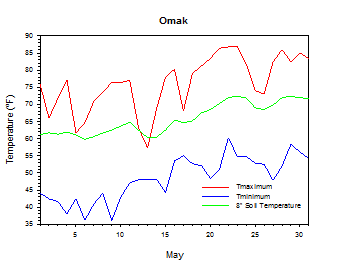 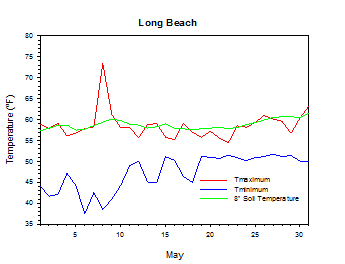 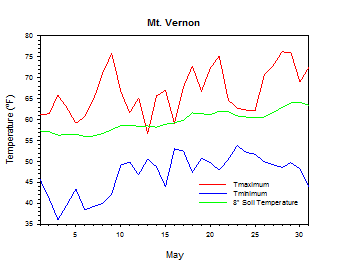 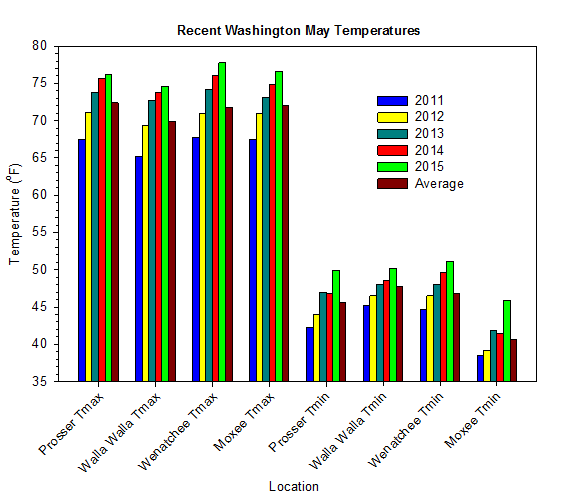 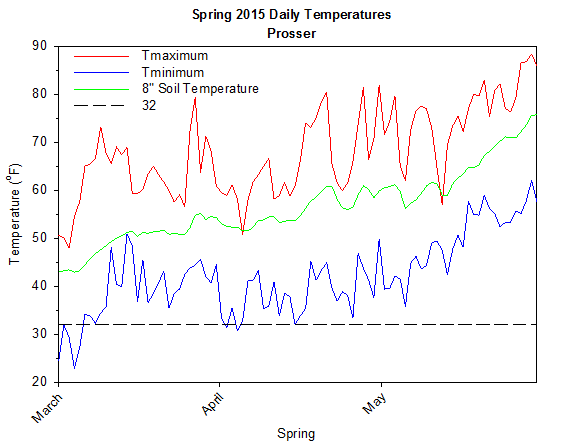 Spring Weather
March and April Review
March was the fifth record warm month of the previous nine months at that time. Temperatures at Prosser were nearly five degrees warmer than normal, including more than 6 degrees above normal during the day. March 27th was a particularly abnormal day where several stations in south central Washington set new all-time March high temperature records. Wapato reached an impressive 80 degrees, while Pullman topped out at 72 degrees. In fact, the final 20 days of the month were largely frost-free across Washington. Following a relatively cool and dry beginning, March trended somewhat wetter and much warmer for the remainder of the month.

April began with relatively cool and variable conditions. Temperatures were below normal on some days. High temperatures around Walla Walla were only in the 40s on April 5th, while the low at Broadview was 20 degrees. Frontal passages on the 10/11th and 13/14th brought wind, rain, mountain snow, and cooler temperatures. St. John's daily average wind speed on the 11th was 20 mph. 1.11 inches of rain fell at Long Beach on the 13th. The high on April 14th at Garfield East was only 45 degrees, and then the low at Ritzville on the 15th was 23 degrees. Temperatures were very warm on April 20th, as Azwell reached 83 degrees. Garfield East reached only 47 degrees on the 25th, and Ritzville fell to 22 degrees on April 26th. Heat returned at month's end, as Vancouver reached 81 degrees on the 27th, and Benton City climbed to 86 degrees on the 28th.

Overall, April was a dry month, which partly explains why Prosser's high temperatures were somewhat above normal, while low temperatures were near to slightly below normal. The relative lack of clouds and moisture allowed for sunnier and warmer days, and yet cool and stable nights. In fact, the mean low was slightly lower than it was in March, which is of course a testament to the warmth of March, rather than the chill of April. Interestingly, Moxee experienced a precipitation-free April. 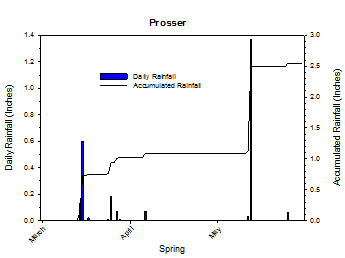 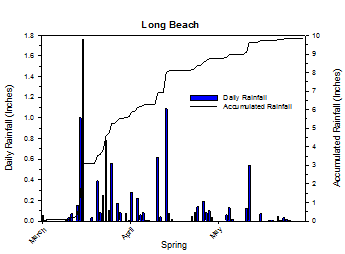 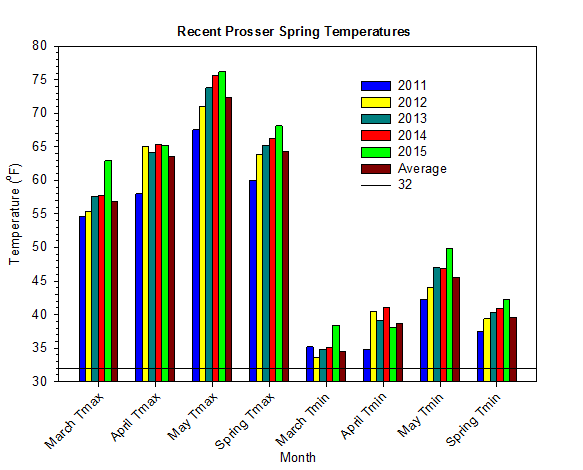 
Agriculture Report
During early May, dry and warm conditions allowed for field work while leaving some crops in need of moisture. Winter wheat was in good conditions, but additional rainfall was necessary. Cherry and apple growers applied cover sprays for fruit fly and codling moth, and the planting of onions and corn continued. Unfortunately, the Roza water supply was shut off for much of the month in order to save water for later in the season (see the WSU drought page at http://Drought.wsu.edu). In mid May, raspberries and blackberries were in bloom. Heavy rain fell on May 12/13 in south central Washington, but cool and breezy weather minimized the impact on the early cherry crop. Irrigation water was critical in most districts during late May, as producers selectively watered crops, while others showed signs of water stress. Otherwise, early cherry harvest continued and grapes were at full bloom. Fungicide sprays were applied to peaches and other crops, while Spotted Wing Drosophila were seen in Klickitat County. Fruit thinning continued, and hops were 3 to 9 feet up the trellises (National Agricultural Statistics Service).

Climate Outlook
According to the Climate Prediction Center (CPC), warm and somewhat dry conditions are expected from now through early 2016, as El Niño strengthens in the coming months.