Warmest Spring Season Since 1994 Concludes with Hottest May Since 1997

Overview
Twenty years have passed since Prosser last experienced a spring as warm as 2014. This year also marks the continuation of an exceptional reversal of recent fortunes. During the early part of the present decade, cool spring weather was rather commonplace in Washington. Just 3 years ago, Washington observed near-record cold temperatures to start the growing season. In 2014, however, the mean May high temperature was more than 8 degrees warmer than in 2011, while the mean spring high temperature eclipsed its 2011 counterpart by a margin of greater than 6 degrees. Overall, May and the spring of 2014 were warmer than 2011 by 7.1 and 5.2 degrees, respectively. Despite their modest appearance, these numbers are significant changes for one and three-month average values.

Interestingly, the spring season began on a cold note. Green Bluff (near Spokane) recorded a high temperature of only 19 degrees on March 1st. However, arctic air rapidly retreated from eastern Washington, and warm conditions dominated for the remainder of the spring. The period from March 2nd to 8th was unusually wet, and Montesano recorded nearly 8 inches of rain during the week-long deluge. April was a generally unremarkable time, except for the coastal heat wave at month's end. The high temperature at Long Beach soared from 58 degrees on the 28th to 88 degrees on the 30th. The abnormally early hot spell culminated with Long Beach recording their warmest April temperature on record, while simultaneously surpassing their hottest temperature of 2013.

Overall, the month of May can be characterized with the following simple formula: Heat wave. Cool down. Repeat. Seattle soared to 89 degrees on the 1st, but reached only 69 degrees on the very next day. Another heat wave later in the month sent temperatures soaring above 90 degrees in northwestern Oregon on May 14th. Other notable May events include 1.7 inches of rainfall at Stevenson on the 9th, and a 30-degrees low temperature at Ritzville on the morning of May 27th. 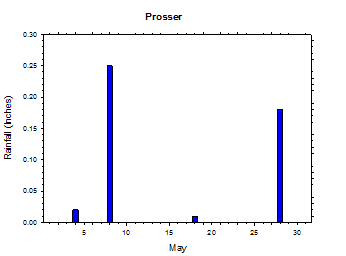 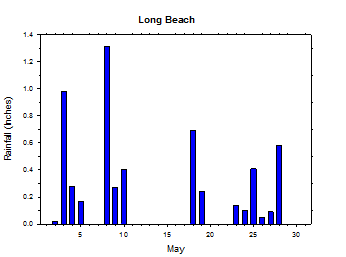 May Weather
Early May-From Hot to Cool
May began with very hot temperatures and mostly sunny skies. A strong ridge of high pressure along with dry offshore flow initially made western Washington the hottest part of the state. However, an approaching upper low and a return to onshore flow allowed for a rapid high temperature drop in western areas on May 2nd. Areas such as Seattle reached 89 degrees on the 1st, but only 69 degrees on the 2nd, and 61 degrees on May 3rd.

Lows on the 2nd were as warm as 64 degrees, but mainly in the 40s and 50s. Meanwhile, highs reached the 80s to low 90s in much of central Washington. Simultaneously, western areas experienced notable cooling, with Long Beach peaking at just 57 degrees. On May 3rd, highs reached the mid 60s to low 70s in central areas, and mainly the upper 50s to mid 60s elsewhere. Lows were mostly in the mid 40s to mid 50s. 1.5 inches of rain fell at Tokeland, with some wet weather in most western areas.

Mid May-Another Heat Wave
Highs on the 10th ranged from the mid 60s to low 70s in central areas to the mid to upper 50s in eastern areas. Lows were in the 30s and 40s, with 0.2 inches of rainfall at the coast. Highs on May 14th reached the low 90s in northwest Oregon, and 89 degrees at Long Beach. Central areas climbed into the 80s, with 70s in eastern border areas. Lows varied from the upper 30s to around 60 degrees. On May 15th, parts of central Washington again topped 90 degrees, although the coast was already experiencing notable cooling.

Late May-Changeable Weather Continues
The 20th was a calmer and warmer day. Highs ranged from the upper 70s to low 80s in central areas to the 60s at the coast. Lows were in the 40s to mid 50s. Temperatures peaked on the 22nd, before slightly more unsettled conditions arrived for the Memorial Day Holiday Weekend. After a very mild morning on the 23rd, a weak front brought rain to western areas, along with breezy and ultimately cooler conditions to the state. Western areas reached the 60s to low 70s, while central areas topped out in the mid 70s to mid 80s. Lows ranged from the mid 40s to low 60s. 1.2 inches of rain fell in western Whatcom County, although amounts were lighter over the remainder of western Washington.

Low temperatures on May 27th were as cold as 30 degrees at Ritzville, but predominantly in the upper 30s to 40s. High temperatures reached the 60s and 70s. Light rain fell around Long Beach and Pullman on the unstable spring day. Highs on the 28th ranged from 52 degrees at Garfield East to 74 degrees at Orondo. Lows varied from 36 degrees at Harrington South to 55 degrees at Wallula. 0.58 inches of rain fell at Long Beach, and winds gusted to 37 mph at Alderdale. Overall, there were widely scattered showers and even some thunderstorms across the state. Highs on May 31st reached the mid 60s to 80s, with lows in the 40s to low 60s. 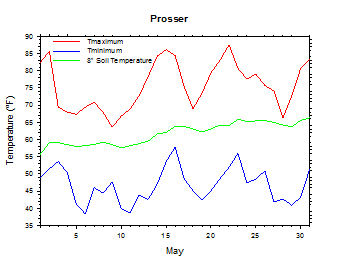 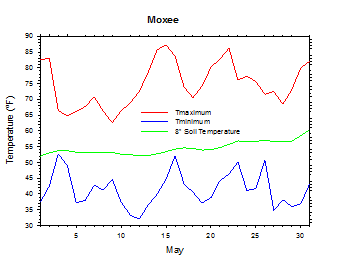 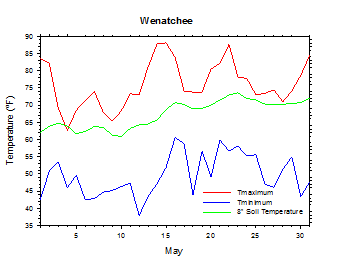 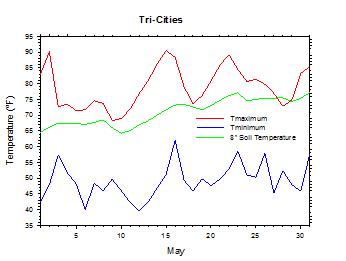 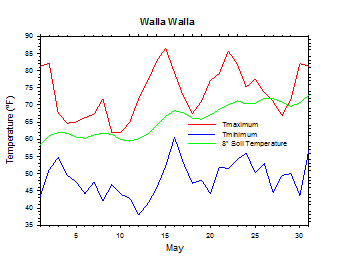 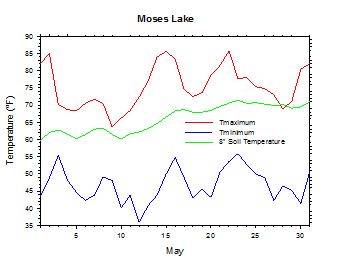 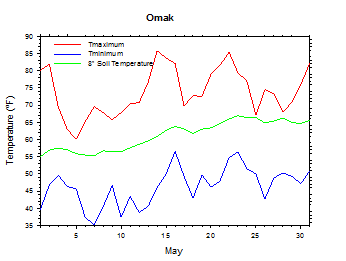 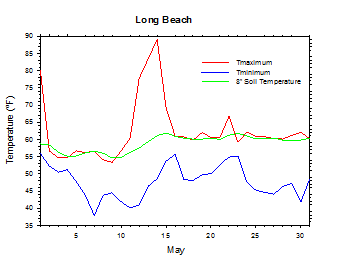 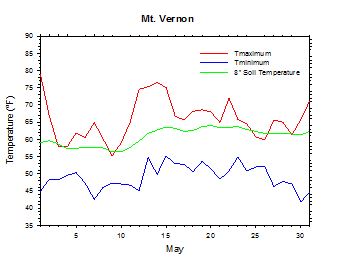 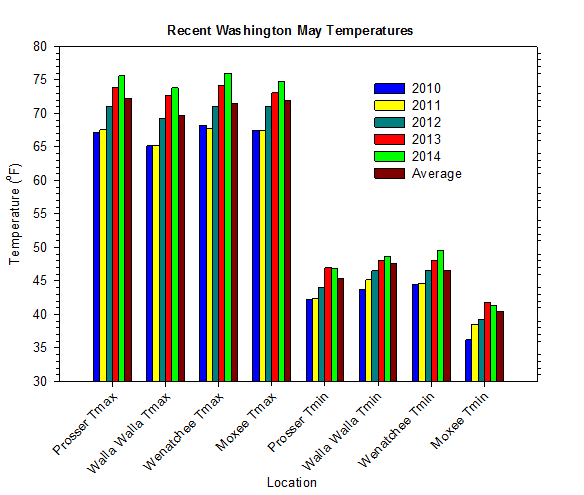 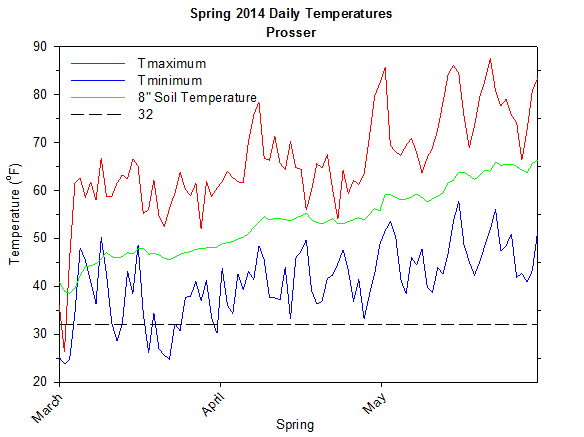 Spring Weather
March and April Review
Despite a cold beginning, much of March was mild and somewhat active. Green Bluff's high temperature on the 1st was a mere 19 degrees, but Vancouver reached 62 degrees on March 3rd. From March 2nd to 8th, Montesano received nearly 8 inches of rain. An unfortunate consequence of the wet weather in the west was the March 22nd Oso landslide, which caused significant loss of life. Despite the preponderance of dry days in central parts of the state, Long Beach recorded only 5 dry days during the month. Overall, monthly temperatures were around 1 to 2 degrees above average.

April was another mild but generally unremarkable month. The main highlight was the end of the month heat wave, which was noteworthy not only in terms of the absolute temperatures, but also for its unusually early and sudden arrival. Western areas recorded the greatest positive temperature anomalies for that time of the year. Long Beach soared from 58 degrees on the 28th to 88 degrees on May 30th. By contrast, the warmest temperature recorded during the summer of 2013 was just 75 degrees. Overall, Prosser's mean monthly temperature was nearly 2 degrees above average, which made April 2014 the warmest since 2000. 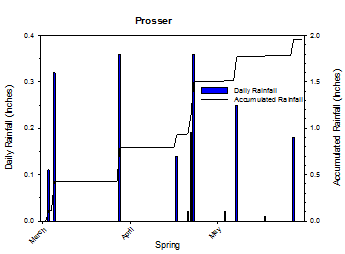 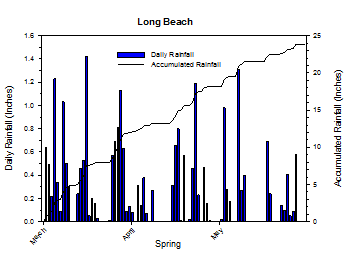 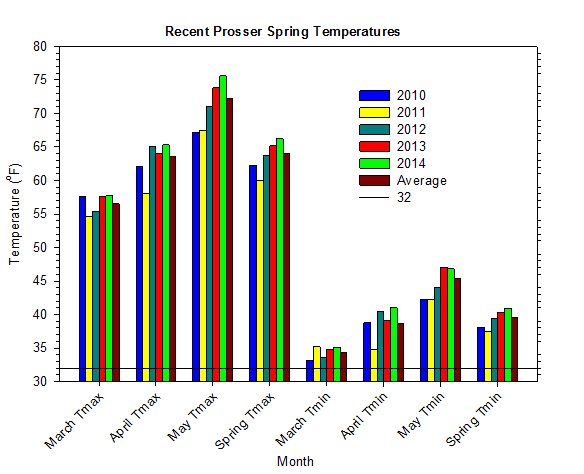 
Agriculture Report
During early May, asparagus harvest was in full swing, and most spring wheat and barley had been planted. As of May 12th, winter wheat crop damage became apparent, while vegetable crops in the Palouse region showed the effects of reduced moisture and cold winter weather. By May 19th, wheat was showing signs of heat stress in response to the warm and dry weather. Meanwhile, the planting of beans and sweet corn continued. Most crops were showing signs of drought stress by the end of May, and the planting of field corn began. In western Washington, tree fruit blooming was complete as of late May (National Agricultural Statistics Service).


This Month in History
On May 10, 2013, the temperature at Hundred Circles soared to 97 degrees.

Climate Outlook
According to the Climate Prediction Center (CPC), warmer than average temperatures are expected in Washington during June and into the early autumn, and then slight odds for above average temperatures continue well into 2015. Generally, no clear signal exists for precipitation. El Niño is currently developing, and is likely to persist into 2015.

El Niño winters tend to be significantly warmer and somewhat drier than normal in Washington. However, this is especially true for areas from the Cascades and westward. In eastern areas, odds for warmer than normal temperatures are fairly strong, while odds are only slightly tilted toward drier than normal conditions.