Overview
September marks the seventh consecutive month of abnormal warmth in Washington. Although last month's heat was hardly record breaking, conditions were nonetheless appreciably warmer than normal for both the day-time and night-time periods. Locations west of the Cascades such as Mt. Vernon were especially balmy, with temperatures of more than 2 degree above normal. Thus, 2014 continues the recent trend, though to a lesser degree, of unusually hot Septembers.

An impressive 1.58 inches of rain fell at Mt. Vernon on September 2nd, while Vancouver soared to 95 degrees just four days later. Much of the first two-thirds of the month was fairly dry with large diurnal ranges. One of the more notable weather episodes of September was the shot of dry air that arrived during the second week of the month, and produced some chilly low temperatures on the mornings of the 11th to the 13th. On September 11th, the low at Pullman was 26 degrees, which was their coldest reading since April 13th. Increasingly unsettled conditions arrived later in September, and a slow moving front spawned 2.34 inches of rain at Tokeland on the 23rd. After a brief dry spell, rain returned to western areas on the 29th and 30th, as a fast-moving clipper-type disturbance passed through the state. Overall, September was a typically variable and relatively unremarkable weather month. 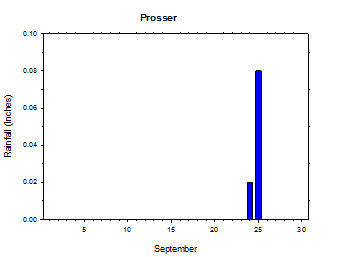 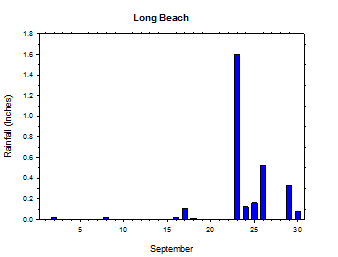 September Weather
Early September-Hot Western Weather
September's weather began seasonally, as highs on the 2nd reached the mid 70s to mid 80s east of the Cascades, and 60s to mid 70s in the west. Significant rain fell in northwestern Washington, including 1.58 inches at Mt. Vernon. Winds were breezy and southwesterly in eastern areas.

Highs on the 5th reached the 70s and 80s, including 88 degrees at Long Beach and Vancouver, while lows were in the mid 30s to low 60s, including 34 degrees at Pullman. Highs on the 6th climbed into the upper 70s to mid 90s in the west, including 95 degrees at Vancouver, and mainly the 80s to around 90 degrees in the east. Lows ranged from 35 degrees at Pullman to 67 degrees at Wahluke Slope. High temperatures on September 7th peaked in the mid 80s to low 90s east of the Cascades, and 80s in interior western areas, but only the 60s at the coast. Lows were in the upper 30s to mid 60s.

Mid September-Cool Nights then Warmer
Highs on the 11th were mainly in the mid 60s to mid 70s in the east, and upper 60s to around 80 degrees west of the Cascades. Lows were mainly in the 30s to around 60 degrees, although Pullman plummeted to 26 degrees. A back door cold front from the north brought very dry air to the eastern part of the state.

Highs on the 17th varied from 65 degrees at Sequim to 91 degrees at LaCrosse, with lows ranging from 46 degrees at Pullman to 66 degrees at Huntsville, as clouds streamed in from the south. Light rain fell in western areas, with 0.23 inches at Sequim. Highs on the 18th reached the mid 60s to low 70s in the west, and mainly 70s to mid 80s east of the Cascades. Lows were in the upper 40s to 60s. Rain fell in northwestern Washington, with 0.25 inches at Ten Mile (Whatcom County), and breezy southwesterly winds in eastern areas.

Late September-From Hot and Dry to Unsettled
Highs on the 23rd climbed into the 60s in the west, and mid 60s to low 80s in the east. Lows fell into the 50s to mid 60s. Rain fell in the west, with 2.34 inches at Tokeland, as a slow moving front pushed into Washington. Winds were generally southeasterly.

Rain-cooled highs on the 24th reached only into the 60s in central Washington, including 61 degrees at Gleed, and 70s in eastern areas. Rain fell in western and central Washington, with 0.86 inches at Poulsbo South, and 0.31 inches at Parker. Aside from southeastern Washington, the sunniest place in the state was the coast. Winds were southerly and breezy, and gusted to 39 mph at Hundred Circles. 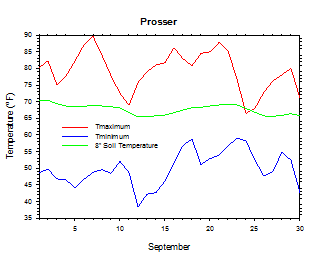 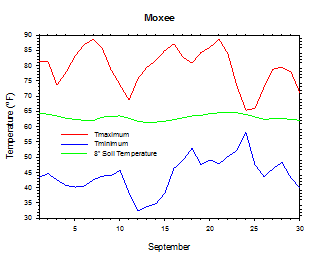 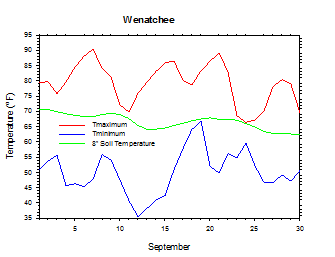 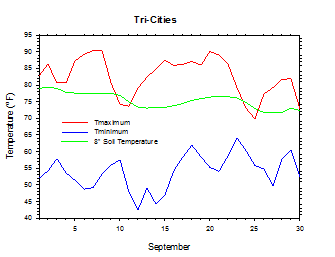 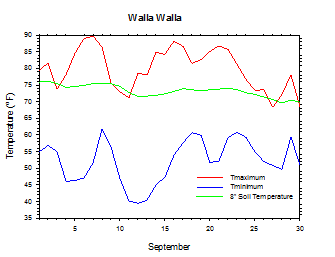 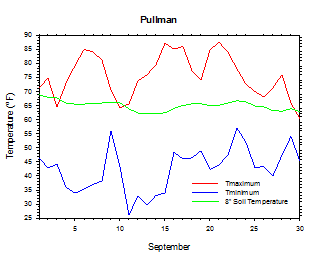 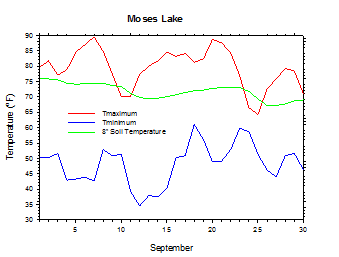 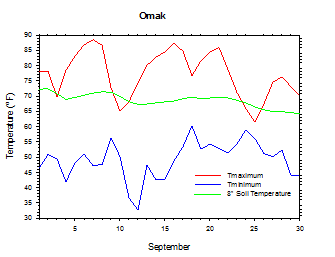 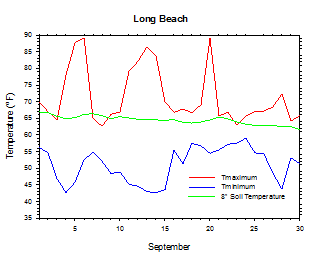 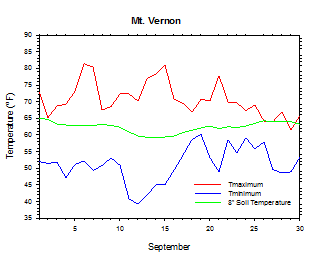 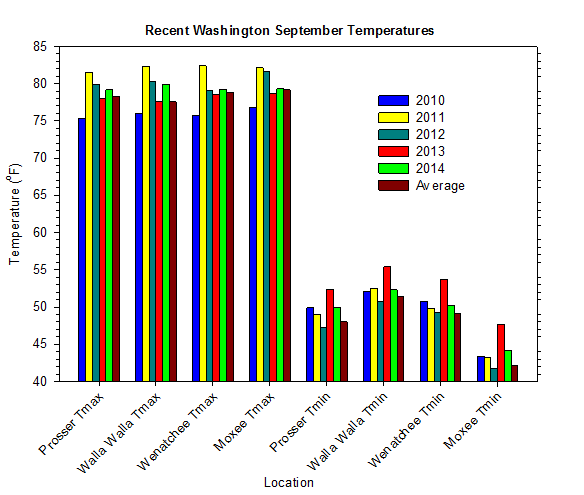 Agriculture Report
Conditions in mid September were generally ideal for harvest, with good crop quality in most cases. As of September 14th, hop and onion harvest continued in eastern Washington, as did tomato and pepper harvest in western areas. Pear, peach, and wine grape harvest also continued, and winter wheat planting was nearing completion.


This Month in History
On September 15th, 2013, the high temperature at College Place soared to 101 degrees.

Climate Outlook
According to the Climate Prediction Center, above normal temperatures and below normal precipitation are likely for October and well into 2015. El Niño continues to develop, and is expected to peak at weak or moderate strength during the early winter.