Overview
Despite a brief period of cold at the beginning of the month, most of March was quite mild. The high temperature on the 1st was only 19 degrees at Green Bluff, but conditions quickly warmed thereafter. Vancouver reached 62 degrees on the 3rd, and some areas experienced low temperatures in the low 50s by March 5th. A very active early period brought significant rainfall to western areas. In fact, Montesano received 7.73 inches of rain from March 2nd to 8th. The remainder of the month was characterized by alternating periods of drier and more unsettled weather.

Western Washington was generally wet, as Long Beach recorded only 5 dry days in the month. Unfortunately, a major landslide struck Oso on March 22nd, leading to significant loss of life and property destruction. By contrast, rain fell on only 3 March days at Prosser. On March 15th, Mabton East reached 72 degrees, while 21 Acres (near Seattle) peaked at 73 degrees on the 24th. However, clear and calm conditions allowed Moxee to drop to 19 degrees on March 22nd. Still, there were few large temperature swings during March, especially in eastern Washington. Monthly temperatures were generally 1 to 2 degrees above average, although Mt. Vernon's mean March low was nearly 3 degrees warmer than normal. Overall, mountain snowpack remained near normal at month's end, although potential concerns of an early melt off or a very dry spring remain valid at this time. 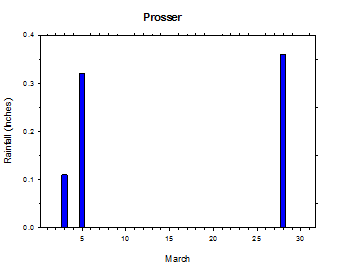 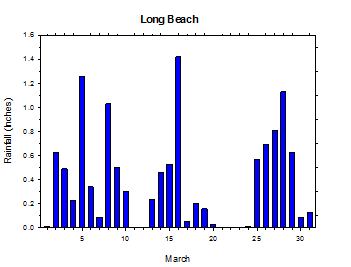 March Weather
Early March-Briefly Cold, and then Much Warmer and Wet
March began with unusually cold air pouring into eastern areas. Highs on the 1st ranged from 54 degrees at Tokeland to 19 degrees at Green Bluff, with lows varying from the teens and 20s in the east to the 30s in the west.

Mid March-Mild and Slightly Unsettled
Conditions dried out by the 11th, as high pressure built into Washington. Lows were briefly cooler in the drier regime, although days were sunny and mild. Highs on the 11th ranged from the upper 40s in eastern border areas to the low 60s in central areas, while lows varied from the upper 20s to the low 40s. Highs on the 16th were in the upper 40s to upper 60s, with lows in the 30s to around 50 degrees. Strong west to southwest winds were observed, as 1.64 inches of rain fell at Snohomish. Showers persisted on the 17th around Pullman and Walla Walla, as strong westerly winds of up to 30 mph were recorded.

Late March-From Dry to Wet
Morning temperatures on March 20th dropped into the 20s in many areas, including 21 degrees at Moxee, but then rebounded into the mid 40s to mid 50s by afternoon. Highs on the 23rd reached the 50s to low 60s, with lows in the mid 20s to 30s. A wetter pattern arrived on the 25th, and continued for the remainder of March. Highs were in the 50s to mid 60s, with lows in the 30s to mid 40s in the east and mid to upper 40s in the west. 0.59 inches of rain fell at Stevenson, and most of western Washington received some rainfall. 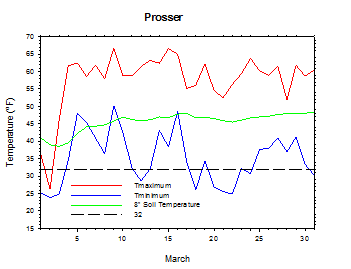 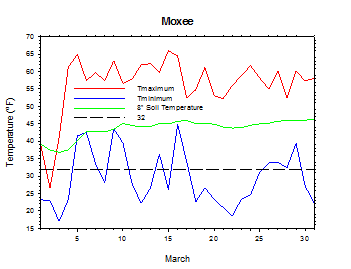 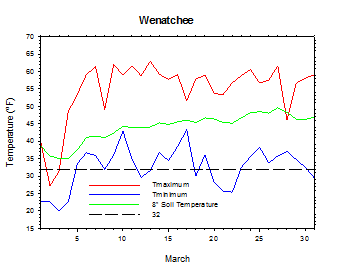 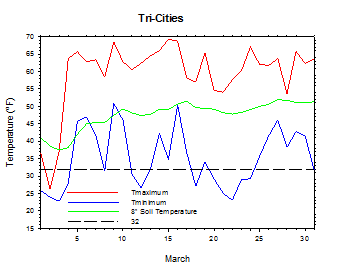 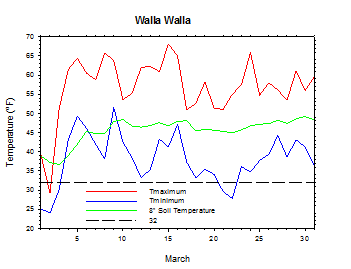 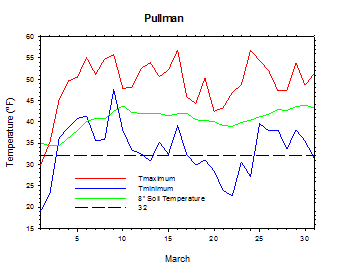 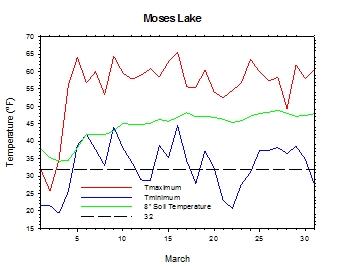 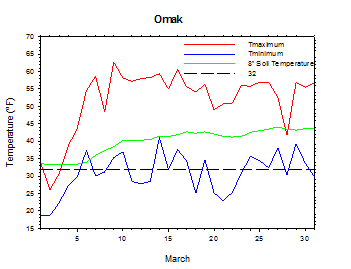 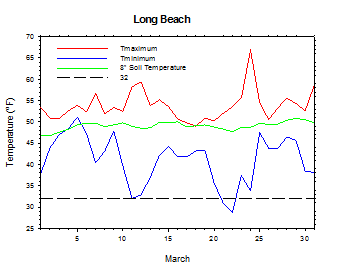 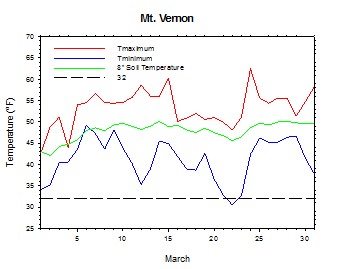 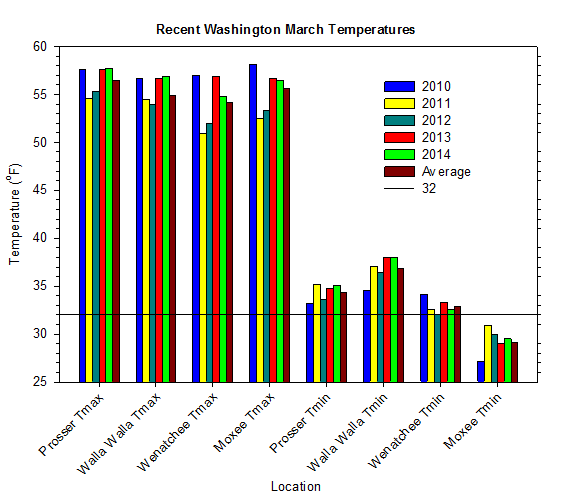 Agriculture Report
The growing season slowly sprang to life during March. Pest control sprays were applied to some pears in Okanogan County, while fruit tree pruning was completed in Yakima County, as most trees experienced bud swell and even blossom color. While Whatcom County berry growers were concerned about potential root rot due to wet conditions, Columbia County soil moisture levels continued to run below normal (National Agricultural Statistics Service).

This Month in History
On March 1st, 1993, the temperature at Moxee plunged to 9.7 degrees.

Climate Outlook
According to the Climate Prediction Center, above average temperatures are likely through the autumn of 2014, along with below average precipitation during the late spring and early summer. El Niño conditions will likely begin to develop in the coming months.