Overview
If you thought that the recent weather was scorching, even by summer standards, you're right. July 2014 was Prosser's warmest month since at least 1990, and eclipsed the previous record-holder (July 1998) by more than one degree in terms of both mean and mean daily high temperatures. Two major heat waves were observed in eastern and central Washington during the month. The first occurred around mid month, as the Tri-Cities peaked at 109 degrees on July 16th. Although the maximum temperatures were not historic, the longevity and consistency of the hot weather was nonetheless rare. In total, there were 10 days featuring 100°F+ high temperatures at WSU Tri-Cities during July, and even the daily average temperature was above 90 degrees on the 16th. Last month also featured more than its fair share of balmy nights. On July 13th, Wahluke Slope's low temperature was an incredible 84 degrees. For the month, Wahluke Slope's low remained above 70 degrees on a total of 18 days. Furthermore, conditions on the 12th and 13th were unusually humid by Northwest standards, with numerous instances of dew point temperatures in the 70s.

Wildfires were an unwelcome yet eerily familiar consequence of the extreme heat and drought, as numerous conflagrations raged out of control across much of north central Washington. At 405 square miles, the Carlton Complex fire is the largest in our state's history. Hundreds of homes were destroyed, and large smoke plumes darkened the skies across much of eastern Washington.

One of the only deviations from an otherwise hot and smoky month was an unusually strong upper level low that brought rain and even thunderstorms to the state on July 23rd. 1.51 inches of rain fell at Lawrence, and winds gusted to 50 mph at FishHook. However, following the slight meteorological detour, heat returned in earnest for the final week of the month, as Washington reverted back to its default climate state. Overall, July's temperatures were well above average, and rainfall was generally sparse in the east. Despite a number of hot days for interior western areas, the coast was largely able to escape the oppressive heat due to the preponderance of onshore flow. 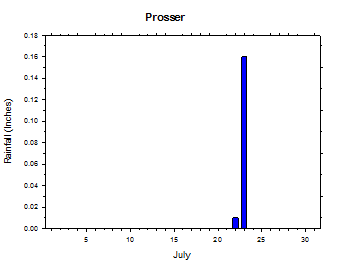 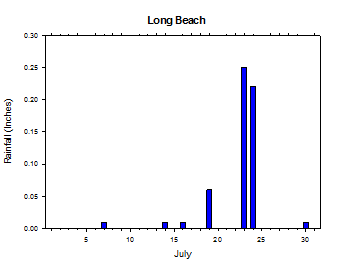 July Weather
Early July - Warm and Dry
July began with very hot conditions statewide. Highs on the 1st were in the 80s and 90s, including 99 degrees at St. Paul South. Lows were in the mid 40s to 60s. As marine air slowly advanced toward the extreme heat on the 2nd, there was a wide range of temperatures. Highs varied from 66 degrees at Tokeland to the upper 80s to around 100 degrees east of the Cascades.

Highs on the 6th were in the upper 80s to 90s in the east, and 70s to 80s in the west. Lows varied from the mid 50s to mid 70s. Most areas were sunny, although a few clouds and sprinkles could be found in extreme northwestern Washington. High temperatures on July 10th reached into the 90s in central areas, but only the mid to upper 60s at the coast. Lows were in the upper 40s to low 70s.

Mid July - From Scorching to Pleasant
Highs on the 13th peaked in the mid 90s to mid 100s east of the Cascades, and 70s and 80s in the west, except 60s at the coast. Lows were mostly in the 50s to 70s. Much of the southwestern half of the state was somewhat cloudy and very humid, as isolated thunderstorms occurred. It was partly sunny on July 14th, with highs in the 90s to mid 100s in eastern areas, and mid 70s to mid 80s in the interior west. 0.26 inches of rain fell at Brewster Flat in southern Okanogan County.

Late July - From Cool to Oppressive
Highs on July 22nd reached the 80s in southeastern areas, while other regions remained in the 70s or even upper 60s. Lows ranged from the upper 40s in parts of the west to the upper 60s in some south central areas. Rain fell in parts of the state, and especially the southeast. 0.54 inches fell at Anatone, including 0.45 inches in only 15 minutes during a thunderstorm.

July 23rd was a remarkably variable weather day that featured blustery conditions, rainfall in western Washington, and thunderstorms in eastern areas. There were numerous reports of torrential rains, strong wind gusts, and large hail associated with the convective activity. High temperatures increased rapidly from west to east, and ranged from the 60s in the west to the 80s in the eastern border areas. Lows were in the upper 40s to low 60s. 1.51 inches of rain fell at Lawrence, as rain fell across much of the state. Winds gusted to 50 mph at FishHook.

High temperatures on July 24th were pleasant, and ranged from the low 80s in parts of central Washington to the 60s and 70s elsewhere. Lows were in the 40s and 50s. Even as the upper low departed Washington, rain lingered in northwestern areas, including 0.4 inches at Lawrence. Otherwise, breezy southwesterly winds persisted, with daily average values as high as 15 mph in parts of eastern Washington. 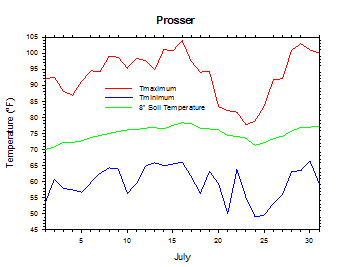 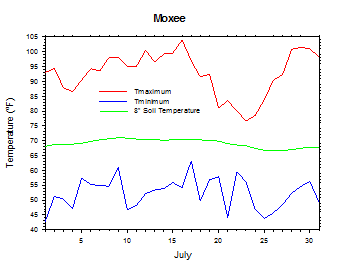 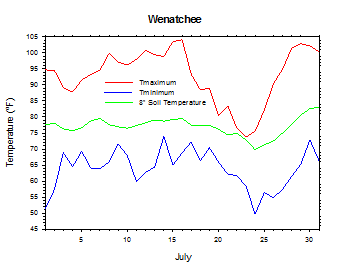 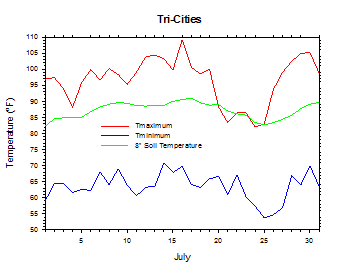 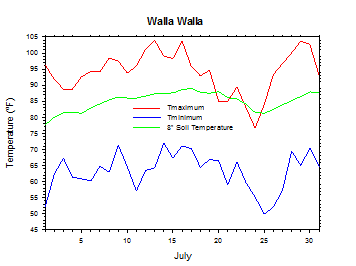 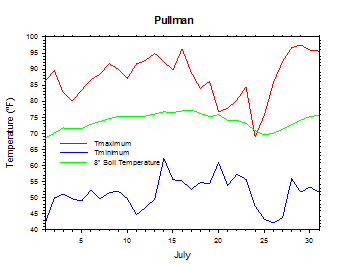 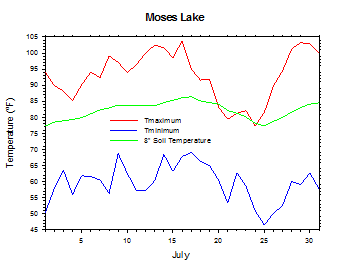 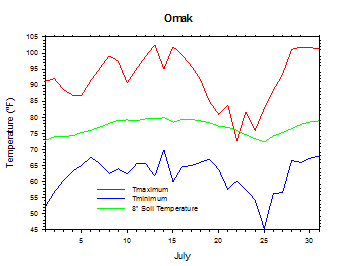 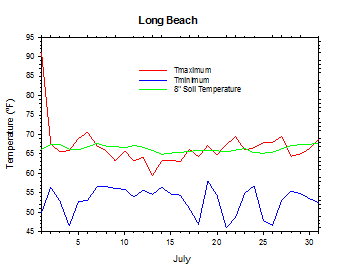 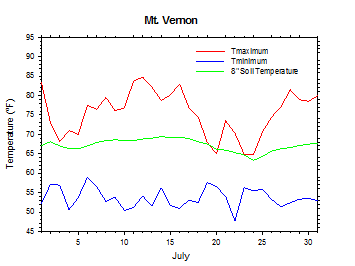 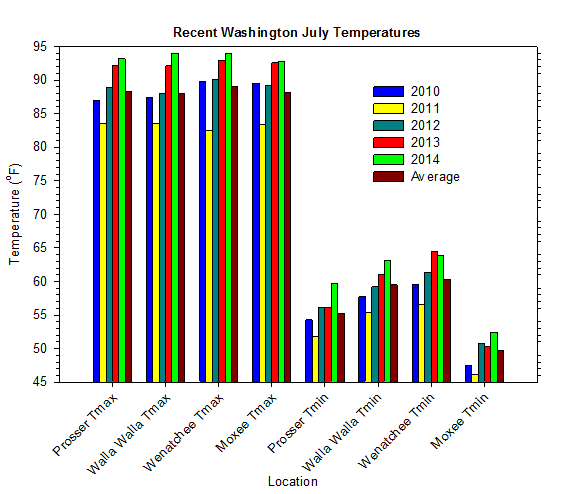 Agriculture Report
As of July 14th, winter wheat harvest had begun in Whitman County. In Grant County, the cherry harvest was complete, and the potato harvest was in progress. Peaches and nectarines were being harvested in Yakima County, while apple thinning continued. Apricot harvest peaked in early July, while the harvest of late variety cherries continued in cooler parts of the Yakima Valley. Uncontrolled fires in north central Washington during the third week of July scorched the edges of some orchards, and also burned some winter wheat crops. In the Yakima Valley, growers were using cooling operations to protect crops from the extreme heat. Scattered thunderstorms in Lincoln County brought isolated areas of rainfall, but also lightning and some hail damage to the winter wheat crop. In late July, wildfires continued to kill cattle and wreak havoc on agricultural in especially north central Washington. Thunderstorms led to areas of hail, which damaged wheat in Whitman County. Otherwise, peach and plum harvest continued in Yakima County.


This Month in History
On July 16, 1993, Prosser (WSU IAREC) recorded a high temperature of only 69 degrees. In fact, during the entire month, Prosser's temperature never reached 90 degrees!

Climate Outlook
According to the Climate Prediction Center, above normal temperatures are likely for the remainder of 2014 and well into 2015. There are enhanced odds for below normal precipitation during the autumn and winter, with no clear signals at other times. El Niño continues to develop, and is expected to peak at moderate strength during the late autumn or early winter.