Despite A Cool November, Autumn Season the Warmest Since 1998

Overview
November was a period of wild extremes in temperature. Although monthly temperatures were slightly below average overall, that is hardly illustrative of day to day conditions. Very warm weather early in November rapidly transitioned to bitter cold by mid month, as highs in central areas fell from the 60s/low 70s to the upper 20s/30s in only a few days, while lows dropped from the 30s/40s to the upper single digits and teens. In fact, Prosser's daily high was below freezing just a couple of days after their first frost of the autumn. However, temperatures again climbed rapidly in late November, only to plummet at month's end. Precipitation was also highly variable within the month. Unfortunately, the wet periods corresponded to warm times, such that snow pack was in rather poor shape at month's end.

October 2014's monthly average high, low, and mean temperatures all shattered the old October records for warmth. Prosser's mean monthly low (45.0 degrees) was an incredible 2.2 degrees higher than the previous record year (2003). In fact, only 8 of the previous 25 Octobers at Prosser had a mean low that was above 40 degrees! It is worth noting that October is typically one the least variable calendar months from year to year, which makes this data more unusual than even these surprising statistics would indicate.

Moxee's mean October low was nearly 11 degrees warmer than last year. Amazingly, Mt. Vernon's mean low for October 2014 was actually slightly warmer than their normal October mean temperature, and also nearly 2 degrees warmer than their normal September mean low temperature. Overall, the monthly temperatures were almost 3 standard deviations above normal (standard anomaly = 2.9), which ranked 2014 near the 99th percentile for October. The combination of an early heat wave and the mid to late month mild nights made October another month for the record books.

Overall, autumn temperatures were well above normal, and the warmest since 1998. Once again, that generalization hardly describes the unique character of the season. An above normal September and an exceptionally warm October were followed by a cool November which featured an early season arctic outbreak at mid month. Despite temperatures that were slightly below normal in November, Mt. Vernon nonetheless experienced their warmest autumn since our records began in 1994. 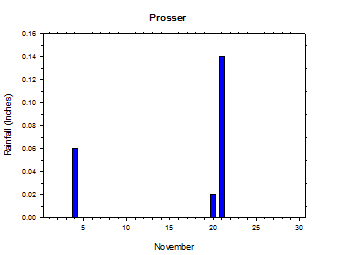 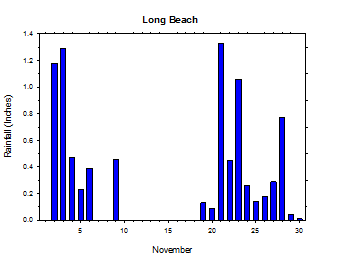 November Weather
Early November-Very Warm
November began with highs in the mid 40s to 50s on the 1st, and lows in the 30s and 40s. Rain fell in eastern areas, with 0.6 inches recorded at Walla Walla. Highs on the 4th reached the 50s to around 70 degrees. Lows were in the 40s to mid 50s. Rain fell in many areas, although totals in central Washington were generally quite light. 0.81 inches was recorded at Tokeland, while Fairfield registered 0.41 inches. Most of the sunshine was found in central areas, as southerly breezes continued in eastern border areas, with a 41 mph wind gust reported at Dayton.

Highs on the 5th reached the 50s to low 70s, with the warmest temperatures around Walla Walla. Lows were in the upper 30s to mid 50s. Rain fell in parts of western and central Washington, with 0.38 inches at Seattle.

Mid November-Cold and Dry
Big changes began on the 10th and 11th, as much colder weather moved into Washington. A pattern disruption caused by the extra-tropical low spawned by Super Typhoon Nuri led to an early season arctic outbreak. Snow fell in southern WA on the 13th and 14th.

Highs on the 11th reached the upper 20s in the east to the low 50s at the coast, with lows in the upper teens to 30s, except 6 degrees at Anatone. Skies were mainly sunny, with dry air and strong northeasterly winds, as arctic air poured in from a strong surface high in Alberta. Daily average wind speeds were as high as 30 mph at Huntsville! Highs on the 12th climbed into the upper 20s to 30s east of the Cascades, and 40s in the west, with lows as cold as 3 degrees at Anatone. It was mainly sunny, as modified arctic air continued to pour into Washington.

Highs on the 14th reached the 40s in the west, and 30s to low 40s in the east, except 23 degrees at Dayton. Lows ranged from 35 degrees at Tokeland to 6 degrees at Lind. Precipitation fell in extreme southern areas, although much of the rest of the state was mainly sunny.

Highs on the 17th climbed into the 30s and 20s in the east, and upper 40s to mid 50s in the west, with lows in the upper single digits to 30s. Aside from some fog in southern areas, it was mainly sunny and winds were rather light. 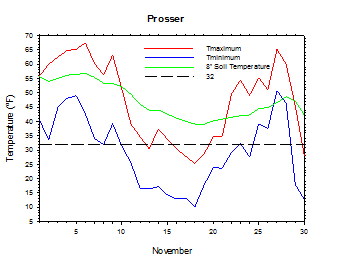 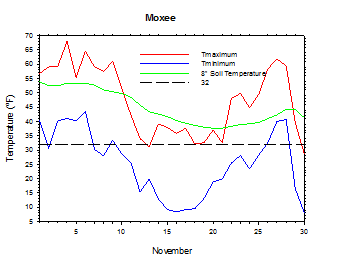 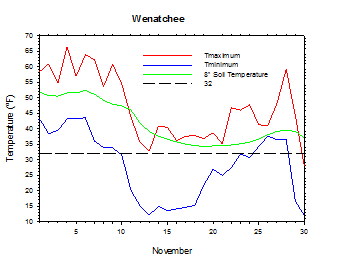 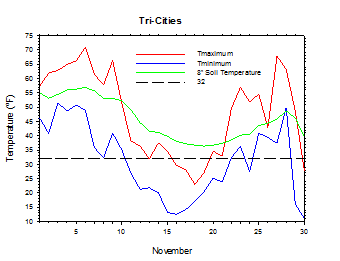 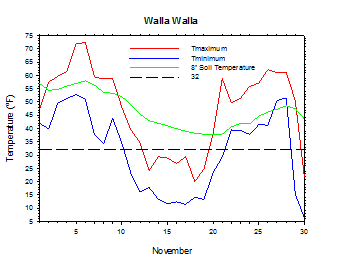 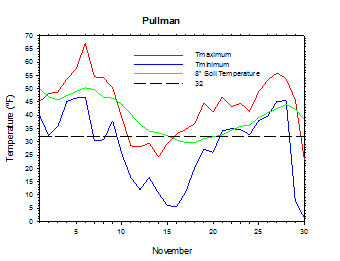 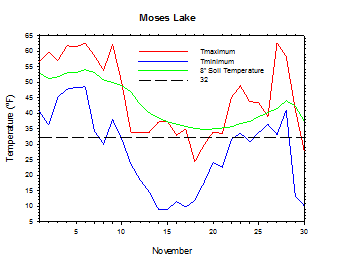 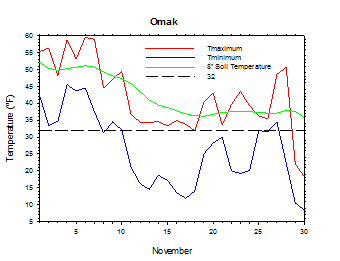 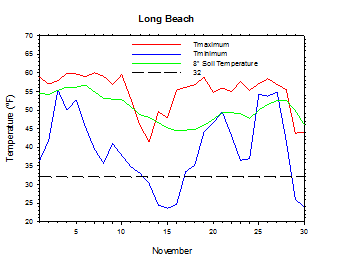 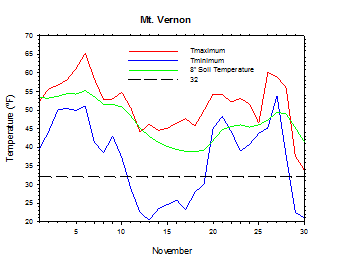 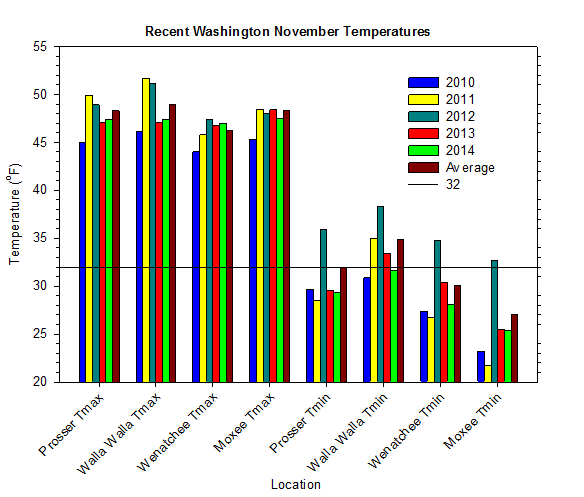 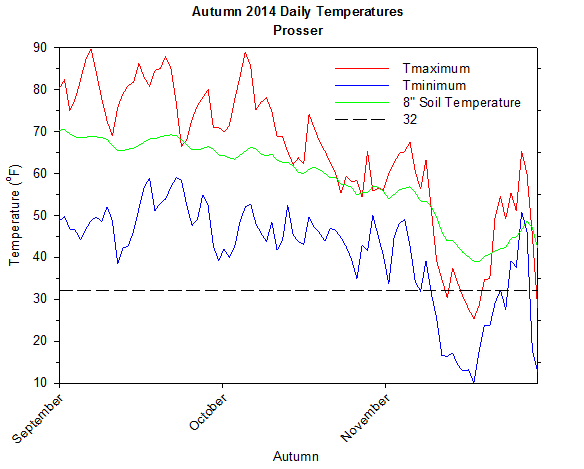 Autumn Weather
September and October Review
September marked the seventh consecutive month of abnormal warmth in Washington. Conditions were appreciably warmer than normal for both the day-time and night-time periods. Locations west of the Cascades such as Mt. Vernon were especially balmy, with temperatures of more than 2 degree above normal. An impressive 1.58 inches of rain fell at Mt. Vernon on September 2nd, while Vancouver soared to 95 degrees just four days later. Much of the first two-thirds of the month was fairly dry with large diurnal ranges. One of the more notable weather episodes of September was the shot of dry air that arrived during the second week of the month, and produced some chilly low temperatures on the mornings of the 11th to the 13th. On September 11th, the low at Pullman was 26 degrees, which was their coldest reading since April 13th. Overall, September was a typically variable and relatively unremarkable weather month.

October was the third time since July that Prosser experienced a record warm month. The monthly mean temperature represented the largest absolute (positive or negative) departure from normal for any month since January of 2010. Early month daytime heat was one major reason for the abnormal warmth. Numerous monthly record highs were set on the 6th, including 89 degrees at Wenatchee and 86 degrees at Moses Lake. Prosser's high of 89 degrees surpassed the old October record by more than 5 degrees! Temperatures, however, were only one piece of the unique October 2014 narrative. October was an all or nothing month with regard to storms and precipitation. For example, Long Beach was rain free for the first 8 days of October, and then recorded rain on 22 of the final 23 days of the month. Following dry and somewhat calm weather early on, conditions became unsettled and at times breezy for much of the middle to latter portion of the month. Periodic heavy rain, especially during the final ten days of October, amounted to big monthly totals in western areas, including a robust 10.85 inches at Stevenson. 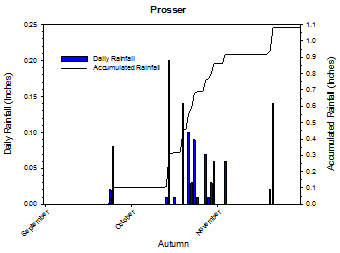 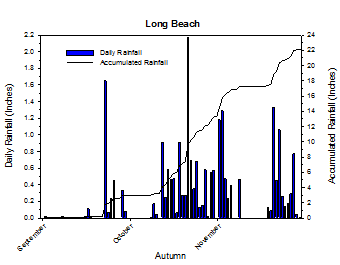 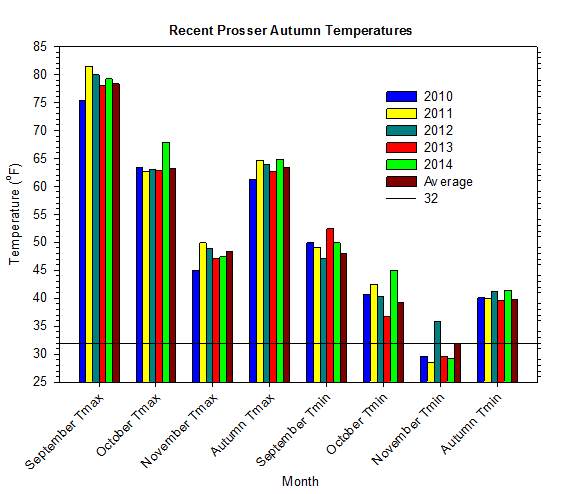 This Month in History
On November 12, 1999, the temperature at Walla Walla soared to 79 degrees.

Climate Outlook
According to the Climate Prediction Center (CPC), above normal temperatures and below normal precipitation are likely well into 2015. The oceanic state now resembles El Niño conditions, although the atmospheric response has been somewhat lagging.