Overview
Despite the broad spectrum of weather that was observed last year, the overall climate of 2014 can be summarized in one word: warm. It was, in fact, Prosser's warmest year in at least a quarter-century. Although 2014 temperatures were fairly consistently above normal, one period stands out from the rest. The mid to late portion of the growing season was an unusual and record-breaking time frame of seemingly unrelenting heat. July was Prosser's all-time hottest month, which was followed by record warm months in August and October. Overall, the summer season was the hottest on record, while October was the most significantly above normal temperature month in five years. Highlights from this toasty time include a high of 109 degrees at Tri-Cities on July 16th, a low of 84 degrees at Wahluke Slope on July 13th, and a high of 92 degrees at Mabton East on October 6th.

Interestingly, however, there were also several interludes of brief but intense cold in 2014. This fact is a testament to how warm the rest of year had to be in order to claim the top spot from 1992. In early February, an arctic outbreak led to several days of bitter cold and areas of heavy snowfall in eastern Washington. Prosser experienced their coldest February temperature since 1996, and also the overall coldest month of February since 1996. Oddly, February was actually slightly colder than the mild January of 2014. Again in mid November, an arctic blast sent temperatures tumbling into the 20s for highs and teens for lows in eastern areas. Several days earlier, many of these same areas had been unseasonably warm in the 60s and low 70s. Interestingly, the mean monthly low was cooler in November than in December. Thus, despite two major arctic blasts that occurred unusually late and unusually early in their respective winter seasons, most of 2014 was remarkably warm.

The Year in Review-2014 Weather
Early 2014 - Bitter Cold in Early February, Otherwise Mild
A rather mild January was followed by a cold February which featured an early month arctic blast. Stormy weather in the middle of February brought much needed snow to the mountains, along with rain to western areas and mild breezes for eastern areas. Although March began with cold temperatures, the remainder of the month and most of April was fairly mild.

Mid 2014 - From Warm to Hot
May and June were warmer than normal but generally uneventful months. However, July and August were characterized by extreme heat. July was the hottest month on record, and was followed by the warmest August on record. On July 13th, the low temperature at Wahluke Slope was 84 degrees, while the high at Tri-Cities reached 109 degrees on the 16th.

Late 2014 - Bitter Cold in Mid November, Otherwise Mild
September was a warm yet generally non-descript month. October, however, was a month for the record books. The high temperature at Mabton East reached 92 degrees on the 6th, and several locations reported record October heat. Hot day-time temperatures early in the month were replaced by mild night-time temperatures later in October, as the weather became wetter and more active. Overall, monthly temperatures were well above normal. In fact, Prosser experienced the greatest monthly temperature departure from normal in nearly five years. However, a major pattern change in mid November sent temperatures tumbling to well below normal values for more than a week. Highs and lows in eastern Washington fell from the 60s and 40s to the 20s and teens in only a few days. Still, the pattern quickly reverted back to abnormal warmth for much of the remainder of the year. 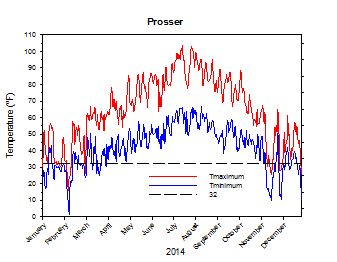 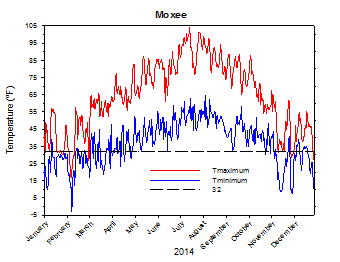 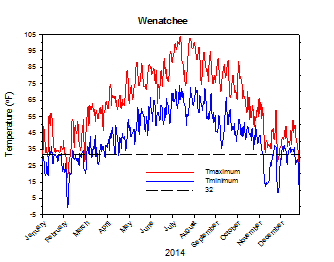 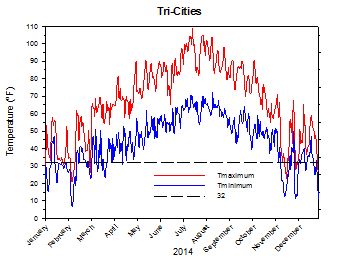 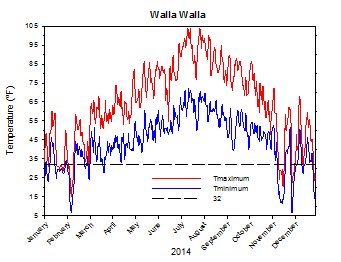 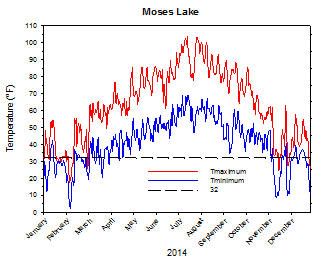 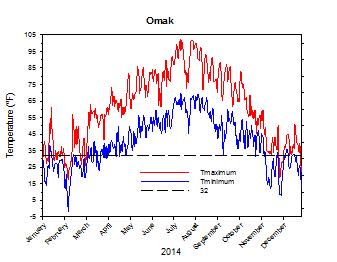 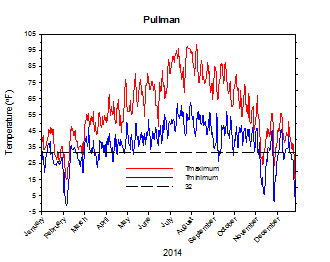 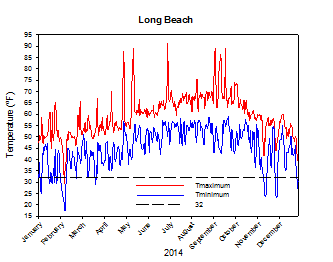 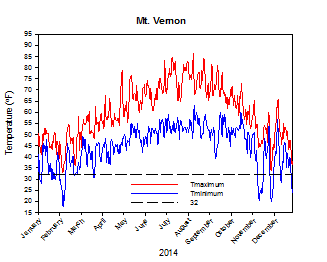 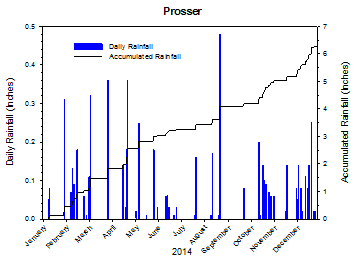 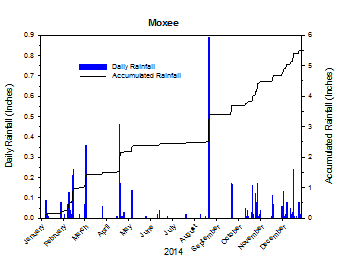 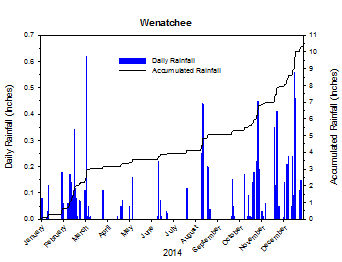 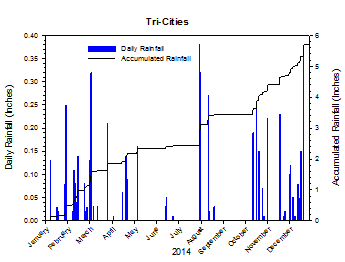 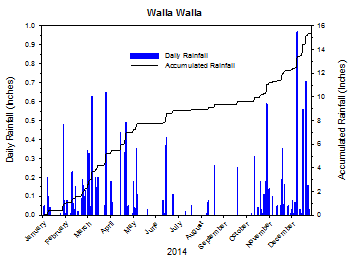 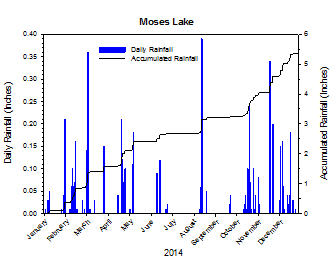 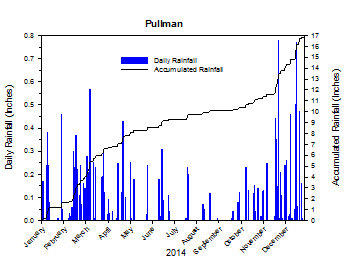 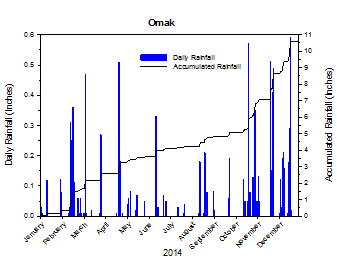 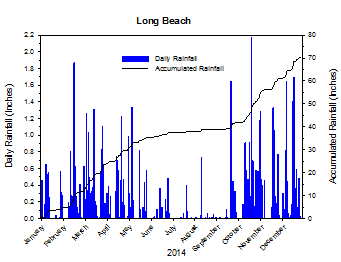 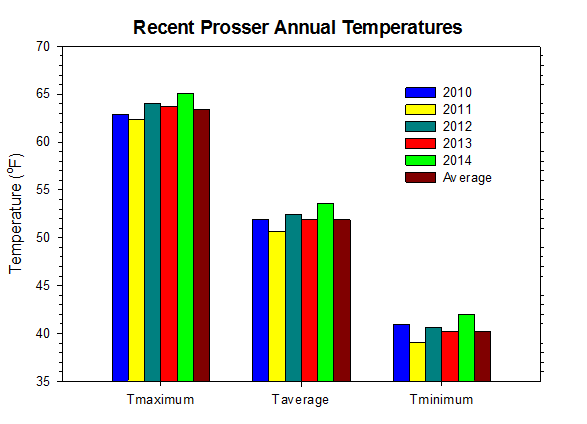 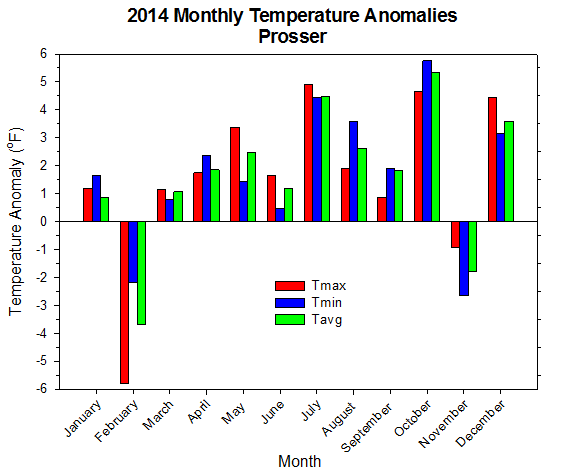 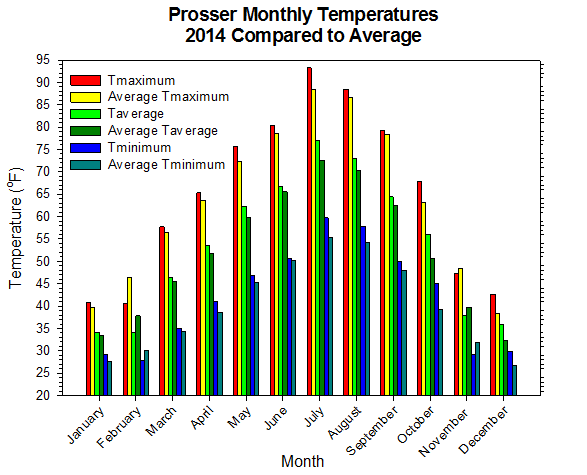 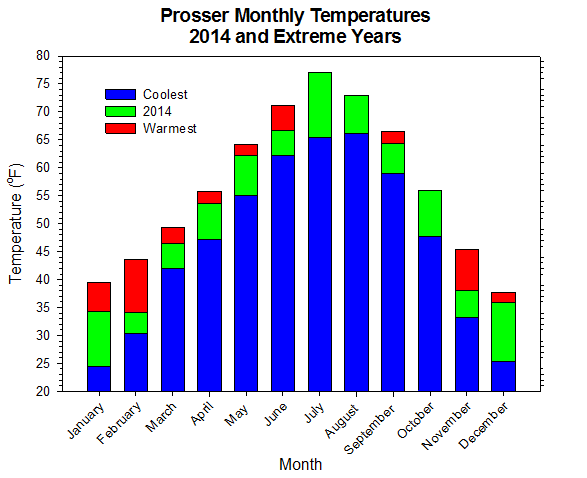 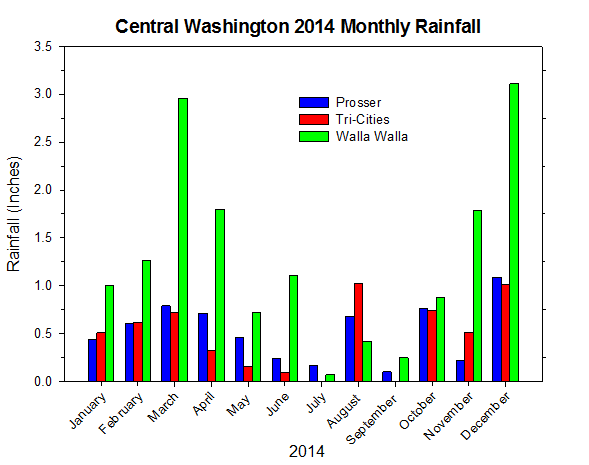 Agriculture Report
Given the record-breaking growing season accumulated GDD values, the most significant agricultural concerns of 2014 were heat and water stress. Most crops fared well last year, with good yield and quality reported in many cases. However, there were peach blocks which lost 60% of their crop to splitting that was caused by rapid, heat-induced growth. The massive Carton Complex fire in north central Washington damaged some orchards and wheat fields in July. Otherwise, the early season cold snap during mid November may have damaged some fruit trees due to the rapid change from warm to cold temperatures. Luckily, the November 2014 cold event was not nearly as severe as the damage-causing arctic outbreaks that occurred in 1955 and 1985 (National Agricultural Statistics Service).


Weather History
Prosser's annual mean temperature in 1992 was 53.5°F, which made it the warmest year on record until 2014. Climate Outlook
According to the Climate Prediction Center, above average temperatures and below average precipitation are favored for most of 2015. Weak El Niño conditions should continue through the first half of 2015, with uncertainty in the evolution of ENSO thereafter.