On July 28th of 1997, unusually moist air lingered around Fort Collins, Colorado. South-easterly winds behind a cold front brought the moisture into nearby foothills triggering intense thunderstorms and rainfall rates as high as 3" an hour. In the most unfortunate areas, rainfall runoff funneled together raising water levels by as much as five feet in as little as three minutes. After the storm settled, as much as 14" of water had fallen - tragically killing five people and causing $140 million damages to Colorado State University alone. Precipitation was highly varied with some parts of the city receiving no measurable precipitation at all. The severity of the situation was not fully realized due to the location of the official monitoring sites, resulting in the National Weather Service issuing a flash flood warning only an hour before water levels peaked.

The above image shows derailed train cars and uprooted homes after the July 28, 1997 Spring Creek Flood.

Out of the catastrophe, the Community Collaborative Rain Hail and Snow Network (CoCoRaHS) was created to source rain, snow, and hail observations in the backyards of volunteer citizen scientists. The network fills the gaps in the coverage of precipitation observations, and ensures that communities do not go unnoticed. Volunteers, armed with rain gauges, check their daily precipitation in the morning and report their values to the CoCoRaHS website where forecasters, water managers, and other interested volunteers are able evaluate how a storm impacted the region or track the water year. Washington hosts about 400 steadfast volunteers who report their rain or snowfall nearly every day, but our state does report hail due to its infrequency. While CoCoRaHS was initially founded to capture the inconsistent precipitation from thunderstorms, the network has evolved to monitor developing drought - even allowing observers to submit qualitative drought condition reports that show the conditions beyond the numbers. Our network east of the Cascades is not as well distributed as the more highly populated western lowlands, and could use more stations to fill the void. Even if a station is located in a dry area, information about the lack of precipitation is still useful, illustrating the spatial differences in our state and providing potential drought information should it arise. 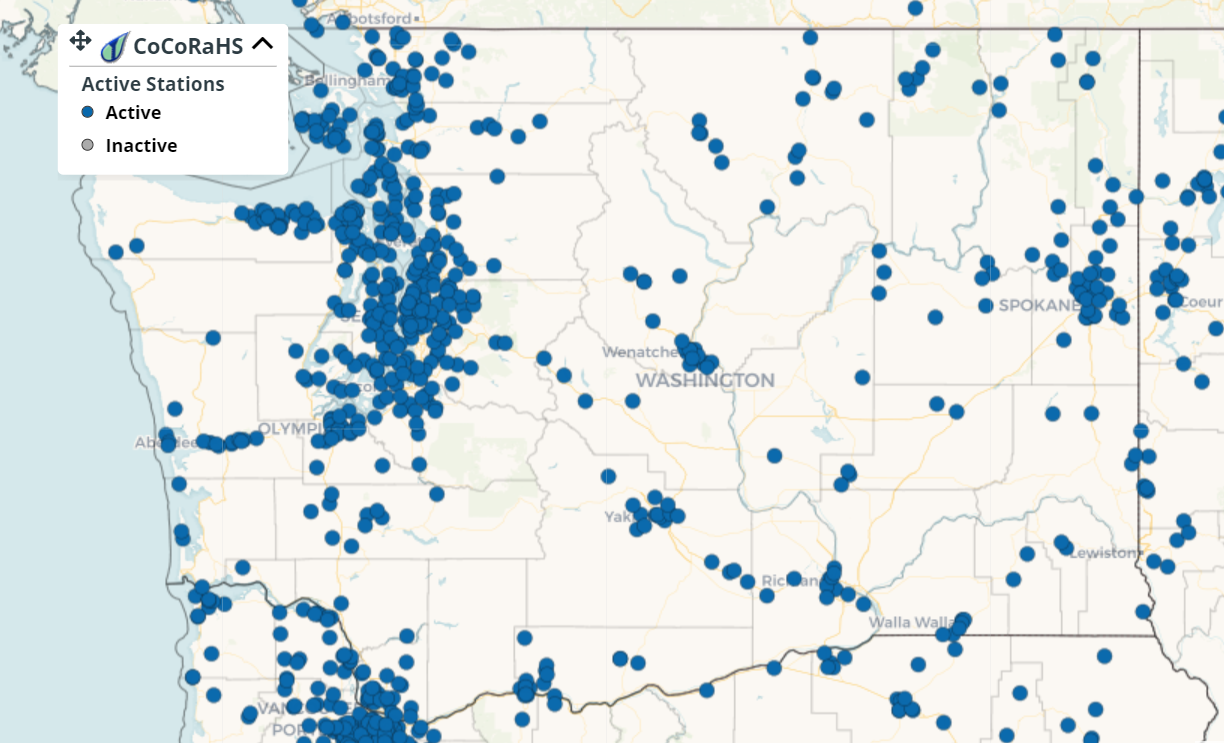 Map of the active stations within Washington State from the CoCoRaHS mapping application. This same map can be toggled to view daily precipitation, condition reports or significant weather reports that are sent to NWS forecasters.

The geographic diversity of CoCoRaHS stations make it a resource not only for forecasters and water managers. Researchers like Phillip Moffat, a WSU hydrology graduate student, have connected with CoCoRaHS in search of a dozen or so volunteers to collect daily precipitation samples that would be analyzed in a lab. This research project aims to record how water isotopes (water with extra neutrons) in precipitation changes as storms traverse over the Cascades. Tracking the isotopes would allow researchers to trace the trajectory of storms, which could impact the snow versus rain profiles in the catchment basin. Out of the 800 CoCoRaHS observers contacted in Washington and Oregon, there was a zealous response of over 180 volunteers willing to take water samples along with their daily precipitation reports. This project is just an example of the many ways that the data is being used by researchers, much of which has broader societal implications. We encourage new observers to join our network if they are interested in tracking their local climate, contributing to water resource management, and participating in a vibrant community of weather lovers. You contact us for more details at wash.cocorahs@gmail.com or visit www.cocorahs.org/.