Overview
This review will be a recap of Washington State's weather during meteorological Fall (September, October, and November) 2020 to provide a look at some of the average and extreme weather conditions experienced and how they compare to climatology. Data comes from a variety of sources, but the main sources include AgWeatherNet sites, local National Weather Service offices, and the Western Regional Climate Center. Other sources will be noted where used.

Fall 2020 Weather
Temperature:
Frequent ridging over the North Pacific and American West helped to keep temperatures above average in most of Washington during the fall, particularly in September. This was particularly visible in overnight low temperatures, which were only observed to be below average (as far as monthly means go) in the Tri-Cities during October and November. The ridging is evident in the following reanalysis from the University of Maine that displays 500 mb geopotential height anomaly averaged over the three month season. 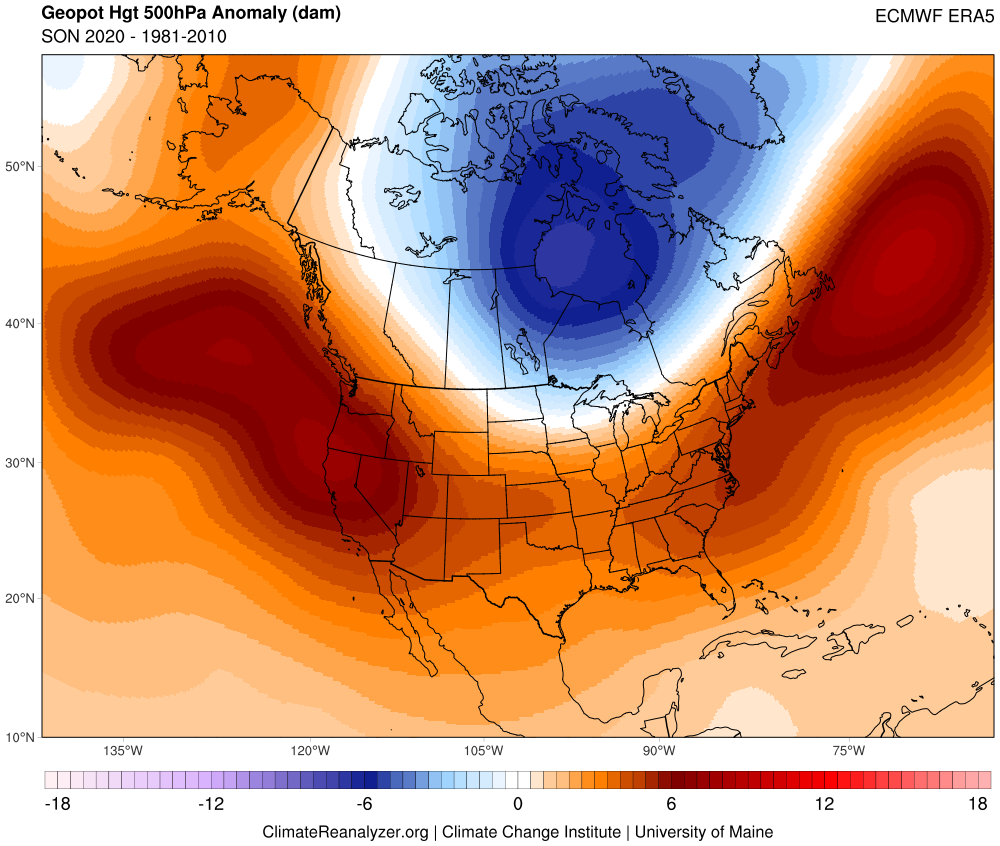 Extreme heat from September mellowed into October and November. Temperatures were still above average in many locations, but in contrast to every selected location being above average in September there was a bit more variance statewide with respect to high temperatures. This can be seen on the following chart. 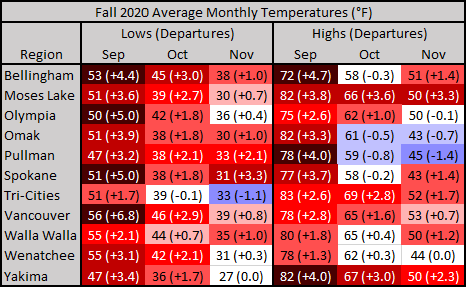 
The general theme to start fall was below average precipitation. Precipitation values toward the end of the season were quite a bit closer to average throughout the state. Yakima, which has been in drought conditions for most of the year, observed over an inch of rain in November. This was the first time they reached that benchmark since January, and only the second time since February 2019.

Looking at the chart above, Olympia's September really stands out. Much of that precipitation fell during an atmospheric river event that lasted from September 23 to 26. The wind flow in this rainy pattern enhanced precipitation in the South Sound while the I-5 corridor north of Seattle spent most of its time in the shadow of the Olympics. Olympia even broke daily rainfall records on September 23 and September 25, with the 23rd reaching over an inch of rain. Most of Eastern Washington also got rain during this period, though values south of US 2 were primarily under a quarter inch. 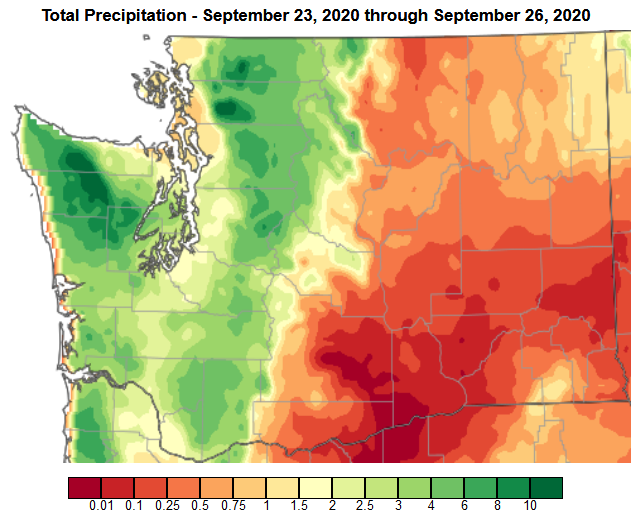 
Hot temperatures were the name of the game to start September. In the lead up to the Labor Day fire event, all lowland locations east of the Cascades saw highs exceeding 90 degrees - Moses Lake even hit 100 during that period. Some Western Washington locations were also above 90, with the only region not starting the month above 80 was north of Mount Vernon.

In contrast, the coldest temperatures mainly resulted from overnight temperature inversions when cold air pooled on valley floors. Specific dates for when the strongest inversion occurred vary statewide thanks to different topography and regional weather patterns, but one of the best inversion comparisons among AgWeatherNet sites come from the mid-Yakima Valley.

The Sunnyside site sits in the port area south of Interstate 82 at 690 feet above sea level. Less than three miles to the west lies the Snipes Mountain site at an elevation of 1212 feet. On October 26, the temperature at Sunnyside was 19 degrees while Snipes Mountain observed 28 degrees at the same time.

There were a few substantial wind events through the month of September, some of which caused damage. Wind gusts in cities across Washington didn't exceed 60 mph, but there were several instances where exposed ridges were much higher. Of interest to weather aficionados, wind gusts on Rattlesnake Mountain near the Tri-Cities reached 90 mph during the Labor Day wind event. 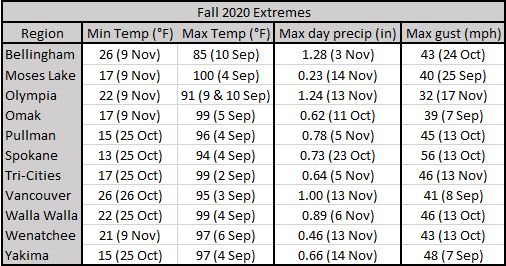 
A strong cold front progressing southwest from Alberta caused strong winds and low humidity to create dangerous fire conditions. Small fires that already existed as well as new fires that started that day spread rapidly, destroying several small towns in both Washington and Oregon. This cold front was so dry that extremely low dew points were observed in coastal cities. This was particularly true in Oregon as the driest air crossed the Columbia Basin before proceeding west over the Oregon and southern Washington Cascades. At Tillamook, the dew point reached 16 degrees and relative humidity was observed to be in the single digits.

The extreme conditions didn't end with the end of Labor Day, though. Dense smoke from invigorated wildfires in Washington, Oregon, and California obscured the sun in many locations. This was able to be observed in solar radiation data taken by stations reporting to AgWeatherNet. At the USDA-sponsored Silverton, Oregon site, solar radiation at solar noon on September 9 was 71 watts/m². This is less than a tenth of what would be expected on a sunny day for that date at that latitude. Pictures from the Salem area even showed skies getting dark hours before sunset.

Scenes from around Salem, Oregon today as smoke and ash move into the area from the #SantiamFire. pic.twitter.com/0QjS5omX6G

As smoke stagnated in the Pacific Northwest, the decreased solar radiation reaching the ground created a long-term temperature inversion in the Columbia Basin that is typically only observed in the winter months. On September 13, the Tri-Cities Airport only recorded a high of 70 while locations above the inversion (like Redmond and Meacham in Oregon) were 15 to 20 degrees warmer.

The Washington Apple Commission reported that the state's apple crop for 2020 is expected to be five to ten percent lower than 2019 because of damage caused in orchards by this event, such as apples knocked off trees by strong winds. Some growers also had damage to trellis systems and the subsequent smoke event delayed harvest by a few days due to workers health concerns.

KVEW, the ABC affiliate in the Tri-Cities, reported that smoke may have been beneficial for home gardens. The diffused sunlight described above makes it so that while radiation from the sun is less intense, the light reaches more of a plant's surface to enhance photosynthesis. Ash from fires in the region that settles in outdoor garden spaces can also help to fertilize the soil.

An AgWeatherNet writeup compared this event to previous ones and can be found at this link.


Just before 5 am, a thunderstorm moving northeast in Greys Harbor County briefly produced a tornado west of US 101 in the Amanda Park area. This tornado was spawned by a convective shower progressing northeast after moving ashore. It was part of a larger storm system that produced a few inches of rain in parts of Western Washington, and areas above a quarter inch east of the Cascades. AgWeatherNet's Joe Zagrodnik described in a blog post in 2018 that shallow convective cells with weak rotation are not uncommon on the west side of the state following a frontal passage, which is likely what this event was.

A damage survey led the NWS in Seattle to rate the tornado at EF-1 with estimated winds of 90 mph. It was able to topple several trees along its' half-mile path southwest of Olympic National Park.


The following tables illustrate the number of base 50 and base 40 growing degree days accumulated through Fall 2020. These measurements are pulled from AgWeatherNet sites near the cities listed and are calculated on our website. Pullman is the exception to this. Data for there was calculated based on observations at the Pullman-Moscow Regional Airport.