Overview
This review will be a recap of Washington States weather during meteorological Spring (March, April, and May) 2020 to provide a look at some of the average and extreme weather conditions experienced and how they compare to climatology. Data is compiled from a variety of sources. Main sources include AgWeatherNet sites, local National Weather Service offices (Seattle, Spokane, Portland, and Pendleton), and the Western Regional Climate Center. Other sources will be noted where used.

Spring 2020 Weather
Temperature:
The following table illustrates average monthly high and low temperatures as well as their departure from average for select areas across the state. Color was added to the table to easily demonstrate how far from average conditions were for each month, with deeper colors representing more extreme conditions. Doing this, it is easy to pick out that we started Spring generally below average but warmed to above average for most locations in May.

April is perhaps the most interesting with many of the selected locations experiencing below average low temperatures but above average high temperatures. This spread resulted from persistent ridging over the Gulf of Alaska, blocking weather systems from impacting the Pacific Northwest and forcing them into the Desert Southwest instead.

Not only was this impactful on our precipitation (see that section below), but it also had the effect of keeping skies clearer than usual.This had the effect of keeping skies clearer, which This allowed for the wider variation in temeprature between mornings and afternoons, as clouds typically have a moderating effect on theis diurnal patternrange. This changed in May as repeated troughs changed the regional regime into a more active one, pulling in moisture from the south and southwest, moderating our daily temperature swings buthelping to moderate our diurnal temperature range and keeping temperaturesthings generally above average. 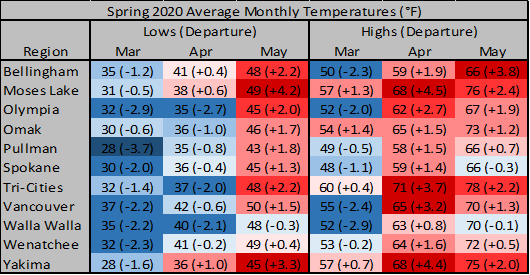 The wide variation in month-to-month temperatures placed the average temperature for the three-month period within a degree of normal in most of the state. The largest exception to this can be seen north of Kettle Falls, where there is a small area that experienced a three-month average that was more than 5°F below normal. Other areas that were cooler than normal include Walla Walla and Chehalis. Some small areas were warmer, namely Moses Lake, Toppenish, and Chelan. Here, temperatures still werent too far fromoff average  all within 2°F on either side.

These three-month average temperatures, as shown in the below graphic, really obscure the broad weather pattern changes between the beginning and end of Spring, which is why the monthly table above is important to use as well. 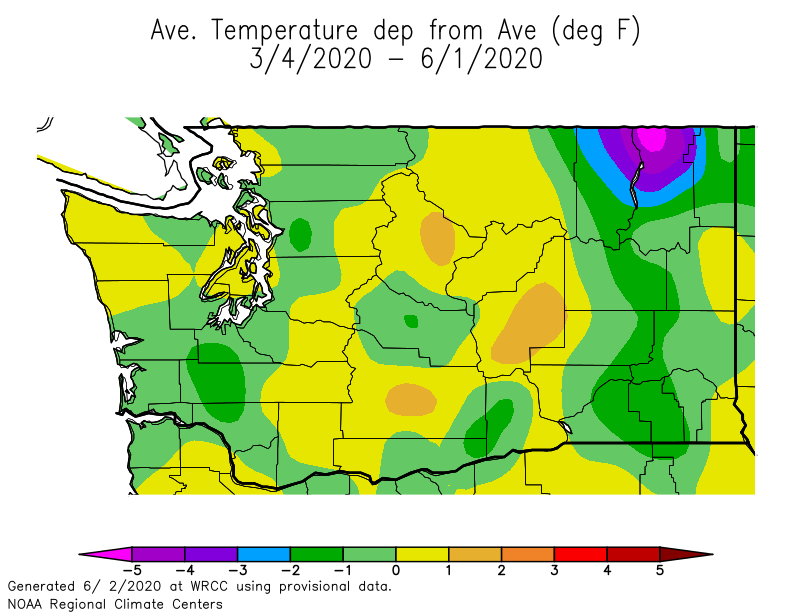 
Wide swings in precipitation were also noted in Spring, especially between April and May. Central Washington entered March with a strong precipitation deficit prompting the National Drought Mitigation Center in Nebraska to list places like Yakima, the Tri-Cities, and Wenatchee under moderate drought (D1 out of 5 U.S. Drought Monitor level D1). This worsened into a severe drought (D2) through the season. Portions of Clark County developed drought conditions as a result of lowered precipitation, with a sliver of Vancouver being listed as severe for a period of time.

The following map from the Northwest River Forecast Center shows the water-year precipitation departures for river drainages in the Pacific Northwest. The water-year starts in October rather than January. This method of calculating precipitation is useful for meteorologists and hydrologists in the Pacific Northwest because winter snowfall in the mountains is a major source of water in our region. In this map the difference between Central Washington and other parts of the state is clear. Interestingly, the driest part of the state (compared to normal) is only about 30-50 miles across the Cascade Crest from the wettest part (also compared to normal). Strong snowpack, particularly in the Okanogan, has helped to mitigate some of the impacts from the lowland drought.

The drought in Central Washington can be seen on the map, with much of that area running below 50% of normal for the time period. Water-year surpluses in the Blue Mountains and northwestern Cascades have been sustained since the atmospheric river in February that produced record setting flooding in the region, despite a prolonged dry period across the state in March and April. 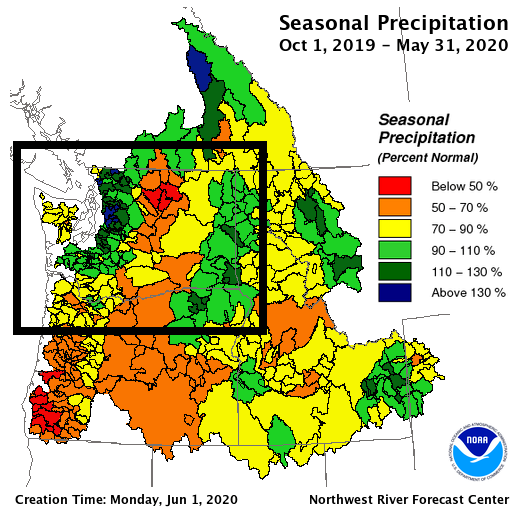 Out of the cities selected for the table below, only one (Pullman) saw a surplus of rainfall during Spring, which was thanks to repeated thunderstorms tracking over the Palouse. Generally speaking, April was the worst month across the state. The unusually strong ridge mentioned in the temperature section was the primary driver in this, giving usproviding clearer than usual skiesdrier conditions as it blocked unsettled active weather from reaching uspassing through Washington. Instead, the precipitation was pushed into Alaska and the Desert Southwest, bringing surpluses to those regions.

This changed in May as the ridging pattern in the Gulf of Alaska gave way to frequent lows and troughs. Unlike in March and April where most of the state was below average for precipitation, most of the state was above average for May. The Palouse and Blue Mountains especially benefited from this pattern with thunderstorms forming in the high desert of Eastern and Central Oregon and tracking northeast toward Northeast Washington and the Idaho Panhandle. Central Washington did not benefit from this pattern enough to ease the drought, but unusually dry conditions were cleared from the Palouse as well as significant portions of Western Washington. 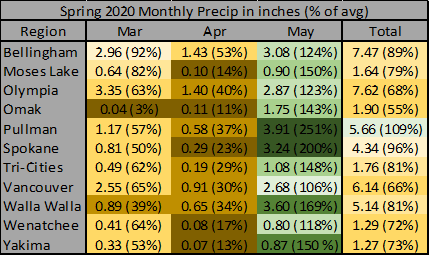 
The following table illustrates the extreme high and low temperatures, 24 hour precipitation (as measured from midnight to midnight), and maximum wind gusts from select cities in Washington. Temperature and precipitation data was gathered from airports near the cities listed, with wind gusts being pulled from a variety of sources within a few miles of each individual city.

Many locations recorded their coldest temperatures during mid-March. That pattern was driven by a strong upper level low centered over Northern California. This fueledThe upper low funneled moisture into the state, wherethe paired with unusually cold temperatures,weather that brought late-season snow to lowland areas of Southwest and Eastern Washington. The cold front that cooled things off in Washington at the start of this event left much of the state 10° to 20° colder than the day previous.

Early April produced strong temperature inversions in some Central Washington valleys. Our Moxee SE station recorded a low of 17° on the 2nd of that month. The morning of the 3rd, the AgWeatherNet site at the Port of Sunnyside recorded a low of 24° with nearby Snipes Mountain only getting down to 34°. These two stations are only a few miles from each other, but Snipes Mountain is about 500 feet higher. This is a good look at how significant temperature inversions can be, especially on clear windless nights.

On May 20, strong thunderstorms moved across the Palouse and mountainous regions of Eastern Washington producing the wettest day of the season for a few cities. Not shown on the table above is Some lolocations in the Blue Mountains that received over three inches of rain that day. The heavy rainfall largely spared areas experiencing drought conditions but did cause flooding on streams that flow out of the mountains and into Central Washington.

The warmest day of the season for most locations was in the days leading up to the severe weather event on May 30. Dew points in the 60s through parts of eastern and south central Washington also provided uncomfortably humid and sticky conditions for many. This boundary layer warmth and moisture wereas someone of the contributing factorsors that helped to provide ample to the instability that fueled that event.

May 30 brought with it the largest severe weather outbreak in the Pacific Northwest since 2006. The Storm Prediction Center issued an enhanced risk for the day for the first time it had been used on the West Coast since that category became operational in 2014. Some areas started the day with strong thunderstorms. One of these produced over half an inch of rain at the Richland Airport while the Tri-Cities Airport just a few miles away in Pasco only got a hundredth of an inch. 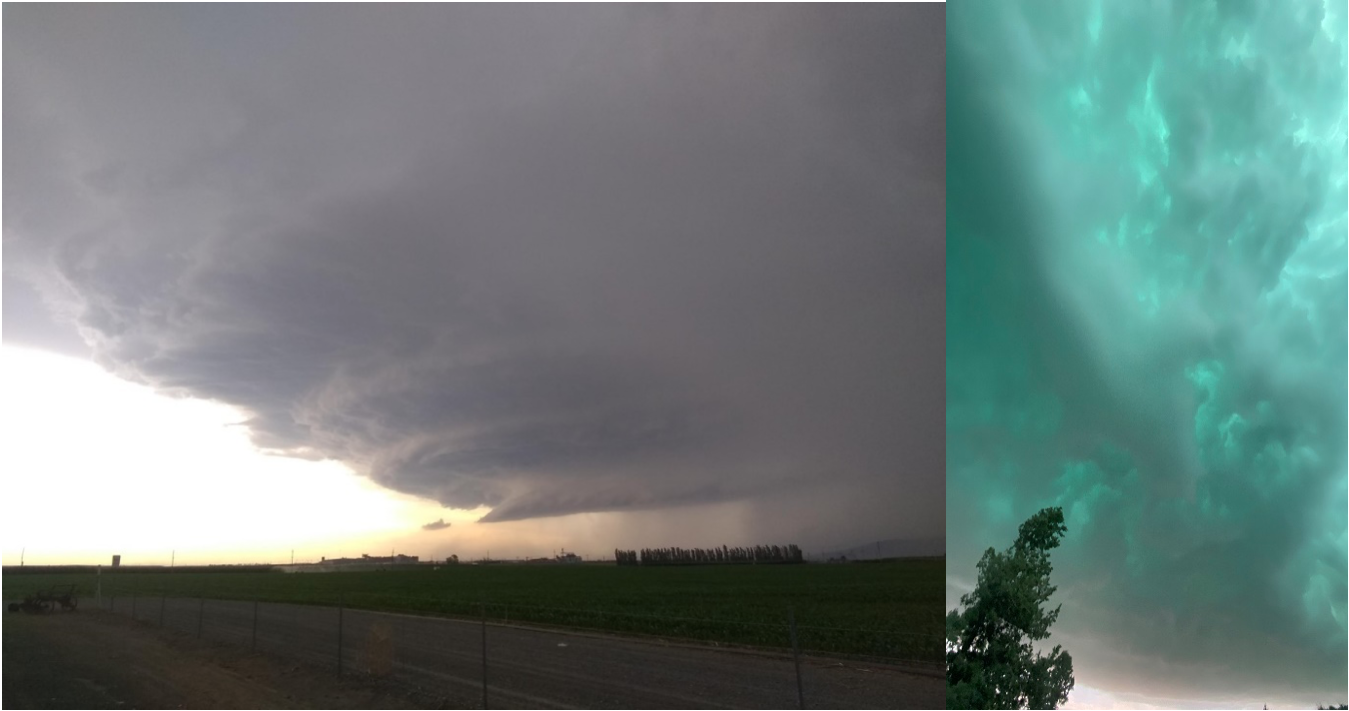 
Mid-morning brought some severe thunderstorms to the western slopes of the Cascades, with warnings issued for places like North Bend and Issaquah. More widespread severe weather began initiating around Klamath Falls, Oregon around noon and moved north, reaching Washington by early evening. The Storm Prediction Center noted 28 severe weather reports in the state  all of them wind. Large hail was a major player in Oregon, but by the time the storms had reached the state line they had become more linear in fashion. A 97 mph wind gust was located near Vantage as the system moved through. These reports can be seen on the following map. 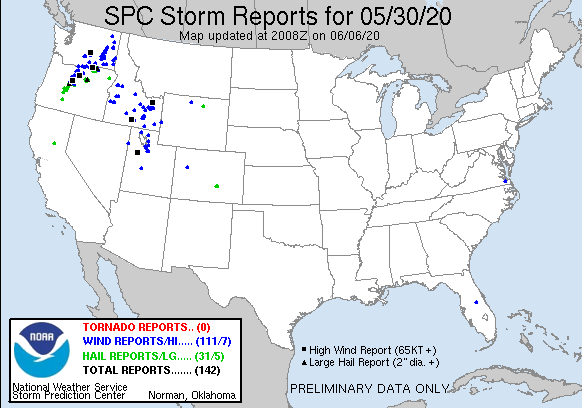 Aside from the severe storms near the Cascades mentioned above, the 30th was primarily a rain event for the west side of the state, with some locations recording their highest single-day rainfall for the season on that day. This is especially true in the Puget Sound Region.


The following tables illustrate the number of base 50 and base 40 growing degree days accumulated through Spring 2020. These are pulled from AgWeatherNet sites near the cities listed and calculated on our website. 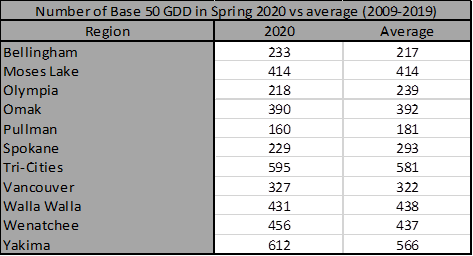 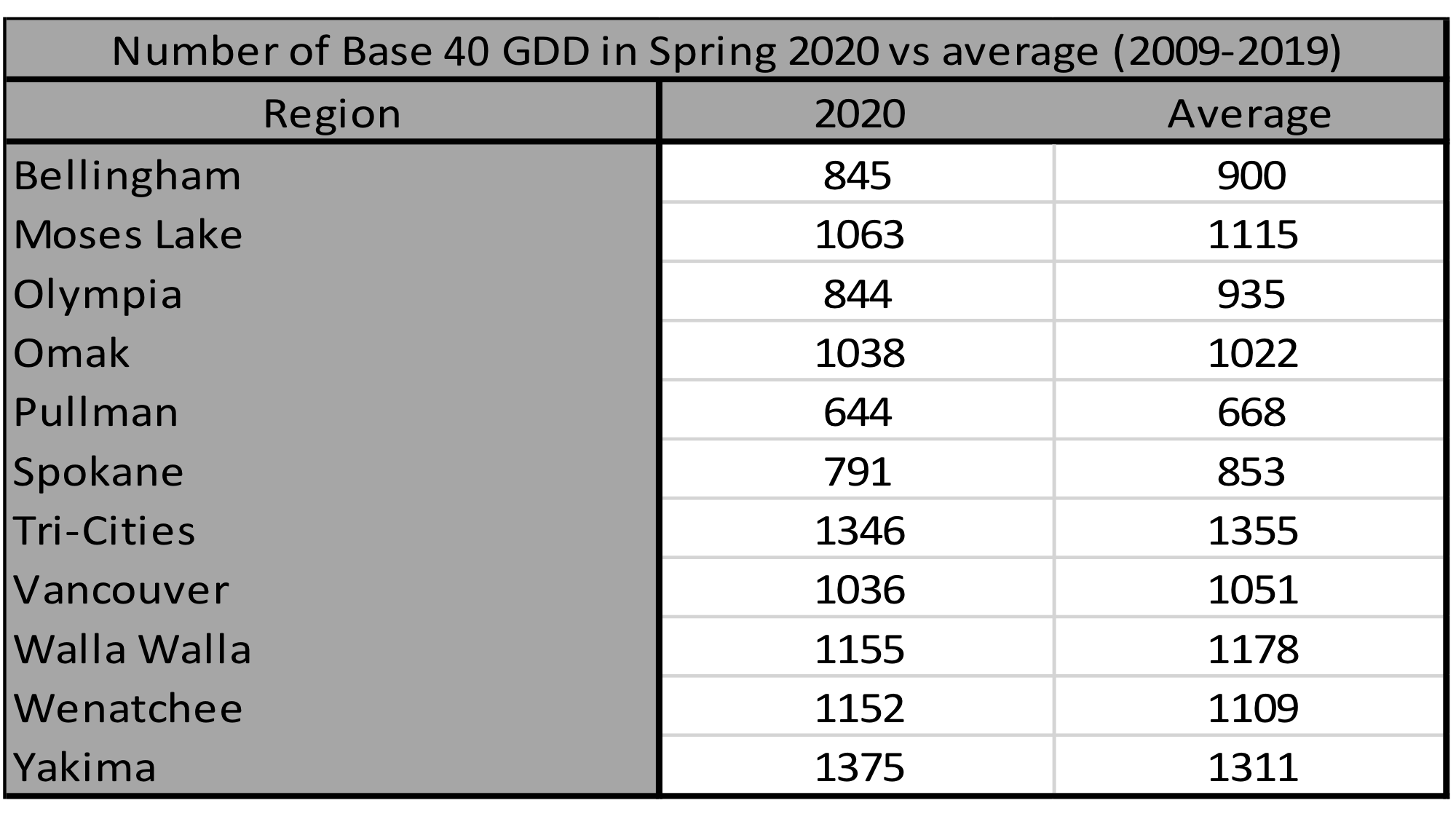 For both metrics, values are pretty near the Spring averages. The unusually cold to start to the season seems to have been counteracted by the unusual warmth toward the end. Many locations exhibited a slow increase in GDD to startinitially, with degree day deficits being removed during April and remaining near average during the month of May.