Rare tornado touches down in Richland 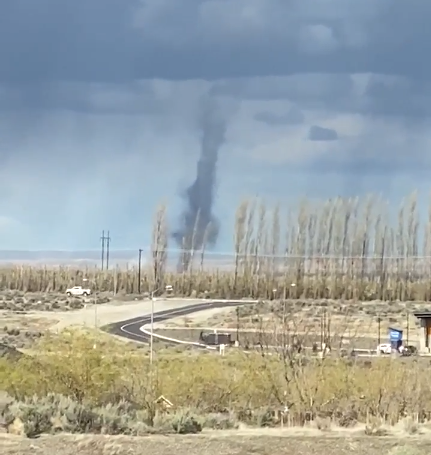 The tornado as seen from the Queensgate area of Richland. Photo courtesy Shawn Alton, used with permission.

On Tuesday (March 31), a weak tornado touched down on the north side of Richland, Washington at about 2:30 pm. Several people around the Tri-Cities were able to take pictures and video of it, which were shared by local media. The tornado lasted for about 15 minutes before dissipating.

Based on videos, pictures, and doppler radar imagery, it looks like this tornado tracked near a Richland neighborhood called Horn Rapids and moved east, dissipating before reaching the research district along George Washington Way. While much of this land is within city limits, it is a fairly undeveloped area. There have been no reports of damage or injuries.

Tuesday's weather setup was not one that would typically produce tornadoes. An upper-level trough helped to provide unstable conditions in Eastern Washington. As surface temperatures warmed, general instability in the atmosphere produced scattered showers in the Columbia Basin with a few rumbles of thunder. The presence of the trough also brought freezing levels to below 4,000 feet above sea level, making frozen precipitation like graupel and small hail common among these small storms.

All of these parameters make for interesting weather, but they aren't what we would typically consider as favorable for tornadoes. This tornado was different from tornadoes we usually hear about, though. Most tornadoes in the United States form from supercell thunderstorms. A major characteristic of supercells is that they have a large rotating core that can be as tall as the cloud itself and reach as high as the tropopause in the strongest storms.

This was not the case for this tornado  it was not produced by a supercell thunderstorm. This one was a type of tornado called a landspout, which is a weak variety of tornado that is formed similarly to waterspouts that are typical of Florida rather than most of the tornadoes found on the Great Plains. Rather than being produced by robust rotation in a supercell thunderstorm, landspouts are produced during the formation of smaller, non-rotating thunderstorms. Some sort of low level wind shear is needed to initiate rotation within the updraft, creating a weak landspout tornado. Tornadoes of this type rarely last more than 20 minutes.

In Tuesdays case, the generally modest convective showers and few thunderstorms that were produced throughout the region were enough to provide an ample updraft. But the source of the low-level wind shear is a bit trickier to determine as southwest winds appeared to be prevalent through lower levels as well as the depth of the troposphere. The more likely sources could have been from southwesterly low-level winds moving around the broken ridgeline that resides to the southwest of where the tornado formed. As winds flowed around these higher terrain features, they may have been turned more southerly or southeasterly in lee of the ridgeline, creating the needed low-level wind shear. Another possibility may be that near by virga showers or scattered rain showers created a downdraft. Once that downdraft reached the ground and spread horizontally, it might have intercepted the updraft of the tornadic storm from a non-southwesterly direction. This could have been enough to provide ample low-level wind shear as well.

According to the National Centers for Environmental Information, Washington sees an average of three tornadoes per year. The strongest tornadoes to strike the state were F-3 tornadoes (they occurred before the National Weather Service switched to the Enhanced Fujita scale) with estimated winds between 158 and 206 mph, with the last F-3/EF-3 tornado occurring in 1972. The largest tornado in the last ten years was an EF-2, which struck Port Orchard in 2018.

This is the seventh tornado to have been recorded in the Tri-Cities metropolitan area (Benton and Franklin Counties) since 1950. Four in Benton County were rated as F-0/EF-0, with the two in Franklin County being rated as F-1. As of writing, Tuesday's tornado had not yet been rated by the National Weather Service. The last tornado to strike the Tri-Cities area hit Kennewick in 2016, causing an estimated $20,000 in damage.