The first week of February brought an atmospheric river event into the Pacific Northwest. This stream of high moisture air originated in the subtropical central Pacific Ocean, roughly around Hawaii. Not only did this event bring copious amounts of rain to Washington, but it brought with it warmer temperatures and higher snow levels. Combining the heavy rainfall with rapid snowmelt caused flooding issues across Washington, with some places exceeding record values.

One unusual aspect of this atmospheric river was the west-northwesterly orientation of the moisture stream, which drove a significant amount of moisture into the Blue Mountains east of Walla Walla and Pendleton. This orientation was aided by an offshore ridge of high pressure and acted to keep the moisture stream nearly stationary for several days while the rainfall added up. Some mid-elevation sites recorded nearly 10 inches of rain from February 5 to February 8, with doppler radar estimating higher values nearby. Preliminary estimates from the PRISM climate group demonstrate that this is nearly double the February average for this area - in four days! Lower elevations also received a surprising amount of rain. AgWeatherNet's Walla Walla site recorded over two inches of rain during that period, also exceeding the monthly average for that site.

The storm sent a substantial amount of water cascading downstream in the Walla Walla and Umatilla Rivers. Both rivers, plus their tributaries, have their headwaters on the west side of the Blue Mountains. USGS river gauges recorded record high water values in several spots, including Mill Creek at Walla Walla and the Umatilla River at Gibbon. Spots that didn't break records often came close, like the Walla Walla River at Touchet which came to within three inches of breaking its record. Swiftly rising water also set new records for the fastest observed single-day rise.

Pendleton was one of the first cities to be impacted by the flood. On the evening of the February 6, the levee downtown broke, sending water onto streets around the office of the East Oregonian newspaper. In the Walla Walla valley, impacts from flooding occurred largely on February 7 for the eastern half extending into February 8 in the western half.

Small communities in the foothills of the Blue Mountains were especially hard hit. About a quarter of Milton-Freewater was evacuated at one point. The Oregon National Guard sent in helicopters to rescue people trapped on their roofs between Interstate 84 and US 12. In Walla Walla, existing levees and channels on Mill Creek held despite the muddy torrent surging through the center of town. Still, the city closed several bridges in town as a precaution as holes and other damage were being noted from erosion and undercutting. 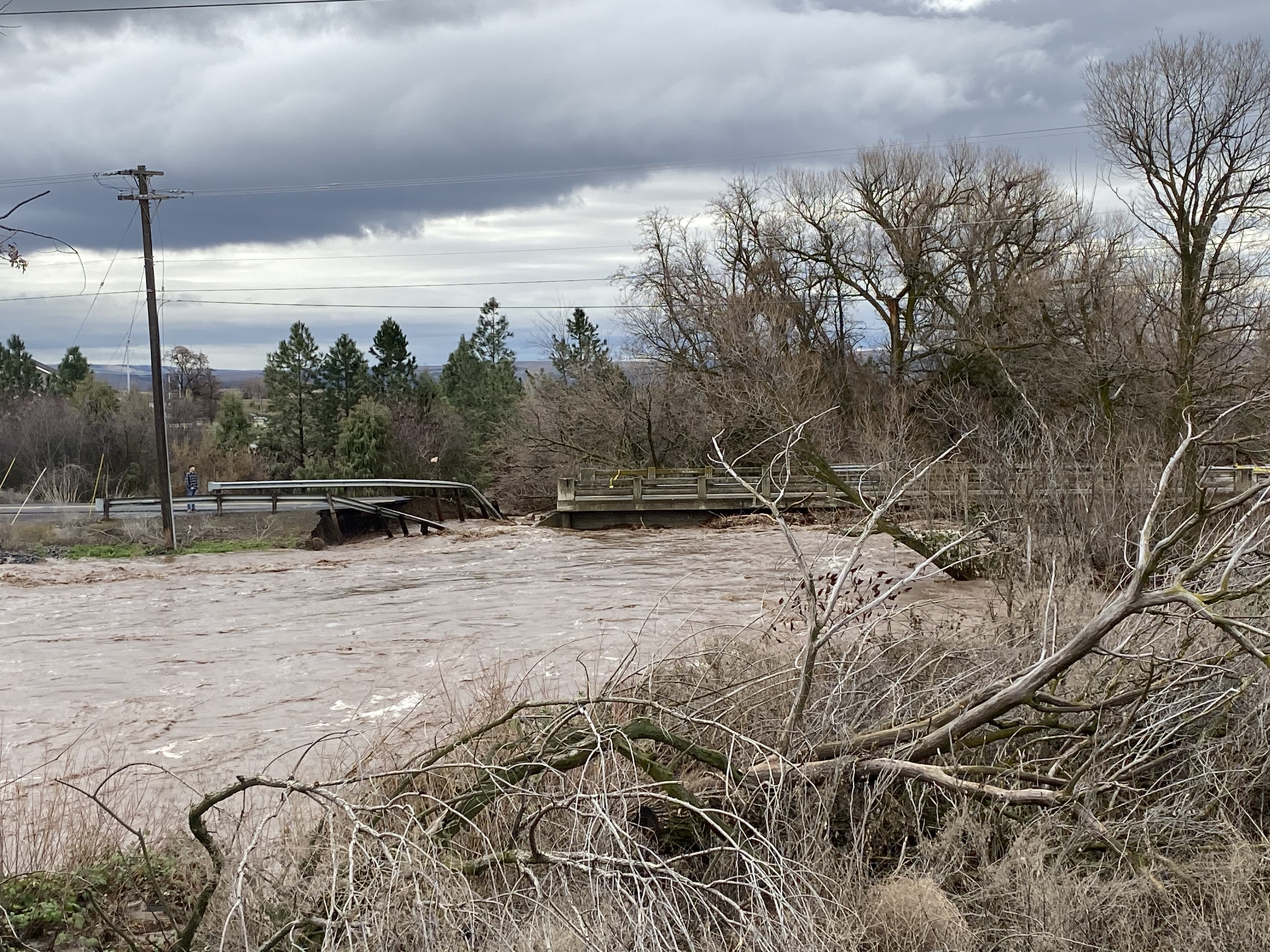 West of the city where there aren't as many engineering projects in place, flooding was widespread within the floodplain through College Place downstream to its confluence with the Walla Walla River. A few roads were washed out by the creek both downstream and upstream of Walla Walla, including Wallula Road outside College Place (pictured above). In several spots, both the Walla Walla and Touchet Rivers filled their floodplains, flooding farm and pasture land also washing out roads and railroads.

Road closures were not limited to along Mill Creek. US 12 was closed for prolonged periods of time between Wallula Jct. and Touchet and between Prescott and Dayton. Interstate 84 was closed from Hermiston all the way to Ontario on the Oregon/Idaho state line thanks not only to the flooding along the Umatilla River, but also around La Grande and Baker City. Sections of the interstate near Stanfield, Oregon took substantial damage and lane closures continue to be in effect nearly a week after the flood event. In portions of Umatilla County, road damage was so widespread and severe that county officials sent out a notice to some residents instructing them to determine if they have supplies to survive for weeks while road repairs occur, and if not to alert officials so they could be airlifted out. 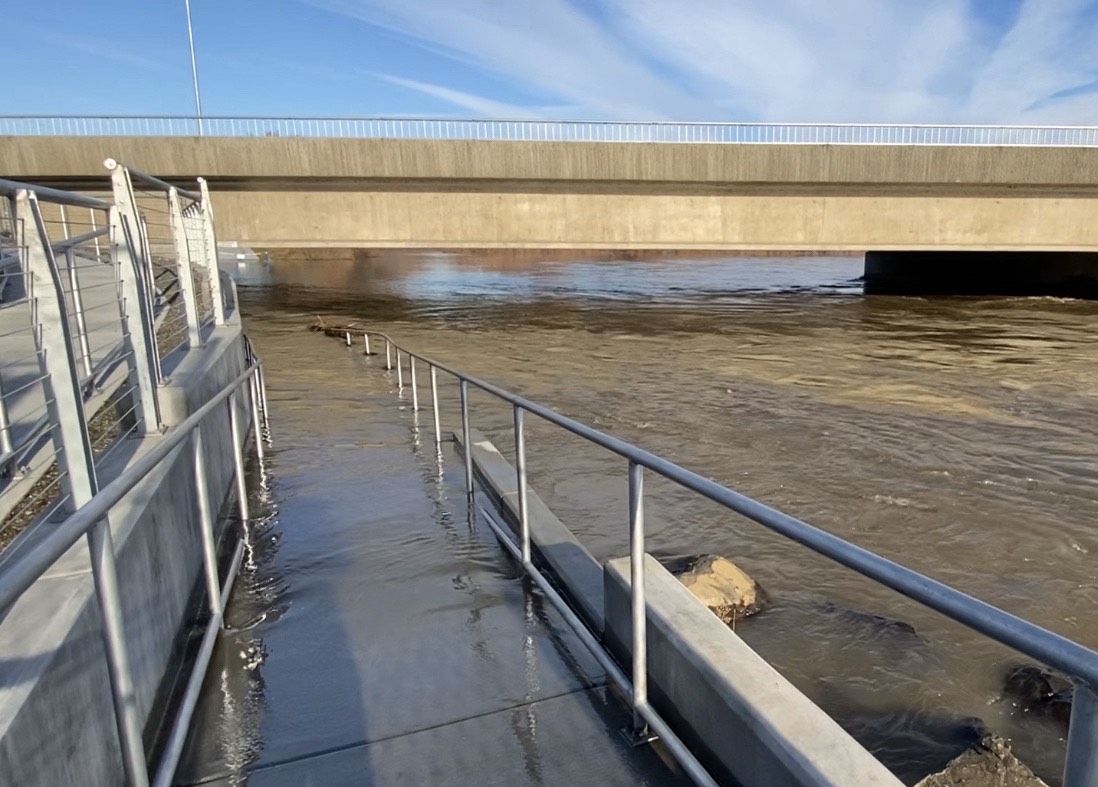 While also receiving large amounts of rainfall, the east slopes of the Cascade Mountains did not receive as much as the Blue Mountains. Flooding did occur along the Yakima River and its tributaries, but this did not reach the same extent as the Walla Walla and Umatilla Rivers. Some road closures were put in place upstream of Yakima, with minor flooding observed as far downstream as the Yakima River at Parker. The gauge at Kiona crested within an inch of flood stage, causing minor flooding issues in Benton County. This was particularly evident in low lying areas of Richland and West Richland (pictured above).

The difference in water content between the Blue Mountains and the east slopes of the Cascades was clearly evident in the difference in flooding. East of the Tri-Cities, flooding rivaled (and in some places exceeded) the 1996 flood event, while west of the Tri-Cities it didn't even come close to that benchmark. In 1996, rainfall values reached over ten inches in just a few days both in the Blues and in the mountains east of the Cascade Crest.

Many of the records broken east of the Tri-Cities were in place from the 1996 flood. That year, the Yakima River at Kiona nearly reached 21 feet rather than the almost 13 feet that was observed this event. As many towns in the Yakima Valley are built on or near the floodplain, that flood inundated parts of almost every town. The 1996 event was preceded by a prolonged cold period of colder temperatures and lowland snow. This froze the ground, so when an atmospheric river impacted the region in February only small amounts of rain and melting snow could soak into the ground. Instead, almost all of this water became runoff and filled area rivers, causing another regional flood event.

Western Washington was not spared from the flooding with widespread impacts there as well. Three-day rainfall values were estimated at over ten inches for a wide swath of the west slopes of the Cascades from US 12 north to SR 20. Radar even indicated that some areas near Mount Rainier could have reached over 20 inches.

As is usually the case in these events, the Puget Sound Region also recorded impressive rainfall amounts. One example is the AgWeatherNet site in Snohomish, which got over three inches of rain in those three days. Many of the rivers that drain the west slopes of the Cascades flooded. It would be hard to list all of the impacts felt on that side of the state, so I will keep to some of the larger ones.

In the Snoqualmie Valley north of North Bend, the Snoqualmie River nearly cut off several smaller communities including Fall City, Carnation, and Duvall. Fall City and Carnation reached the point where there was only one way in or out. Driving options out of Duvall were also limited. In these towns, many folks work in the larger cities to the west like Redmond, Bellevue, and Seattle. The limited open roads available created large traffic problems as many are rural two-lane highways.

While some Snoqualmie Valley had their own troubles to contend with, their situation was additionally reflected in many other small towns in the Puget Sound Region. Another one of these was the Pierce County city of Orting. In Issaquah and Olympia, hundreds were evacuated with many homes damaged. Issaquah Creek reached its highest level in 32 years of records. The Skykomish and Nooksack Rivers flooded a week earlier, inundating parts of Sumas in Whatcom County, along with Gold Bar and Sultan in Snohomish County.

While excessive rainfall west of the Cascades often causes numerous landslides, this event was characterized by several significant slides that cut off communities. Mountain slopes were prone to sliding during this event because the ground was already saturated from an unusually rainy January and an earlier storm that caused widespread flooding and some smaller landslides on February 1-2. So it was not surprising when additional slides occurred during the period of heaviest rainfall on February 6-7.

Two of the largest landslides occurred near Mt. Rainier National Park. A major slide on SR 410 on February 7 cut off the town of Greenwater and closed Crystal Mountain Ski Resort for 4 days. Another slide on SR 706 near Ashford has closed Mt. Rainier National Park indefinitely. Debris remains up to six feet deep on the road with running water continuing to destabilize the slope above the road. As of February 13, a timeline has yet to be established for reopening. A third major slide on a private road in Snohomish County near Monroe cut off 44 homes and may take a year or more to repair.

While many gauges west of the Cascade Crest didn't reach record-breaking heights, impacts were far and wide. As a result of this regional event, Governor Inslee declared a state of emergency to include 24 counties across Washington and Governor Brown declared a state of emergency for several hard-hit Oregon counties. Impacts from this event continue to be felt region-wide in the form of road closures and cleanup operations.