Overview
This review will be a recap of Washington State's 2019 weather and provide a look at some of the average and extreme weather conditions experienced this year and how they compare to climatology. There will also be a brief agriculture report included at the end highlighting some of the ag related weather statistics and general agriculture statistics from the year.

2019 Weather
Temperature:
The following tables illustrate the average monthly high and low temperatures from various regions across the state. This data was compiled from AgWeatherNet stations near the regions listed. While this is admittedly an intimidating conglomeration of numbers, the usual seasonal pattern of gradually warming and then cooling temps, as well as warmer to the south and cooler to the north mantra (warmer west of the Cascades in our case as well), can be readily seen. But there is one more thing that jumped out to us as well. Statewide, the month of February was much cooler than either January or March. As many may recall, a significant cold air intrusion occurred that month and spilled into the beginning of March.

After examining the above tables, it is interesting to also make a full year examination of average temperatures across the state. The map below is courtesy of NOAA's Western Regional Climate Center and illustrates the entire year of 2019's average temperature departure from the 30 year, 1981-2010, average temperature. At a glance the map indicates a close to average year aside from two distinct pockets of cooler than average temperatures located over the Horse Heaven hills/eastern Yakima Valley and northern Stevens County regions. The heavy black dashed line placed upon the map roughly represents the central Cascades and the divide between 'western' and 'eastern' Washington and will be carried through in subsequent maps. Close examination reveals that western Washington experienced a slightly warmer year in 2019, while eastern Washington experienced a slightly cooler year than climatology. 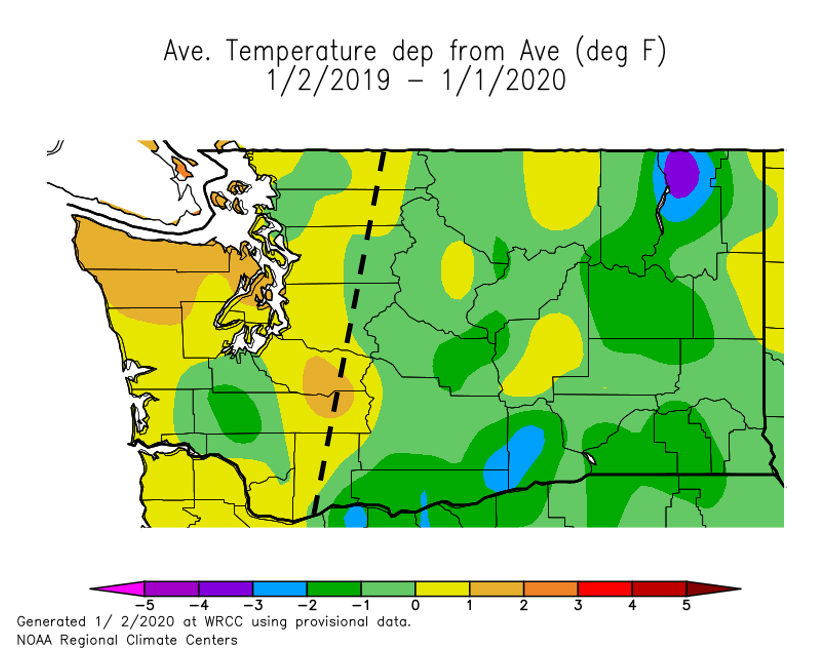 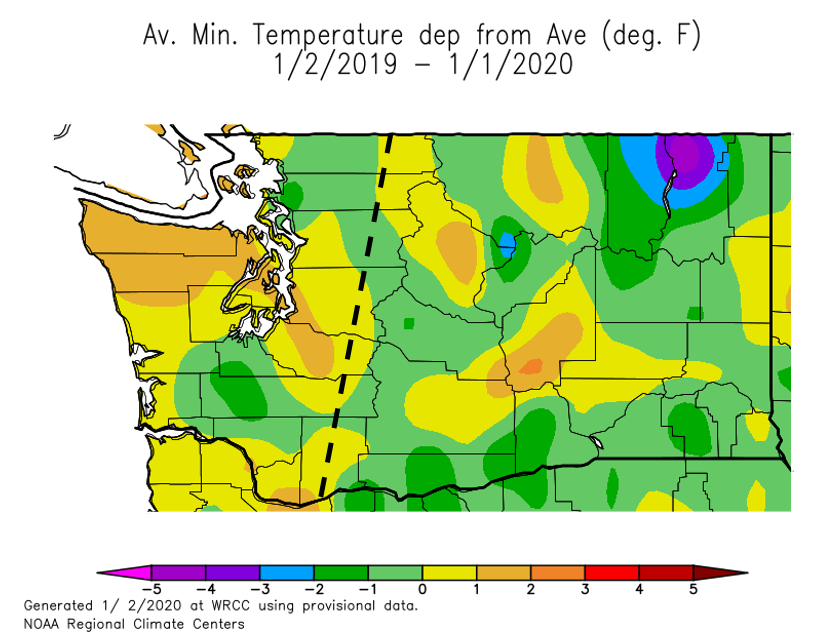 Both average minimum and average maximum temperature maps seem to indicate a rather variable year across much of north central/northeastern Washington. Perhaps due to the complex terrain features, valley areas may have maintained slightly cooler temperatures longer on average, especially during the cold air outbreak, as cold air pooled in these areas without much option for escape. While upland areas perhaps maintained slightly warmer temperatures than average due to the lower than average snow year last winter (this is illustrated by the first figure in the next section titled 'Precipitation', with Washington state outlined in the heavy black box. Courtesy NWS Pendleton). This would generally result in an earlier snow melt in upland areas greatly decreasing surface albedo and allowing spring time solar radiation to more readily warm these areas. 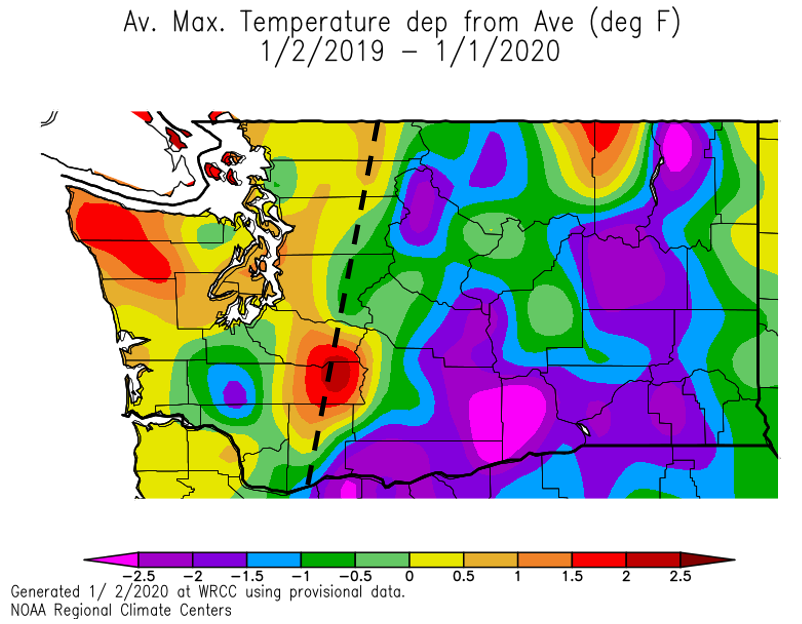 
The following graphic illustrates the seasonal precipitation from the previous winter season (2018-2019). Washington state is highlighted by the heavy black box. The main takeaway here is the lack of winter precipitation, usually in the form of snow, across northern Washington and the Cascades, as well as rain in western Washington. (image courtesy of NWS Pendleton). The lack of snow pack in general can have implications for low land spring run off and has been a large contributor to the drought observed through parts of Washington since May 2018 (Drought.gov). 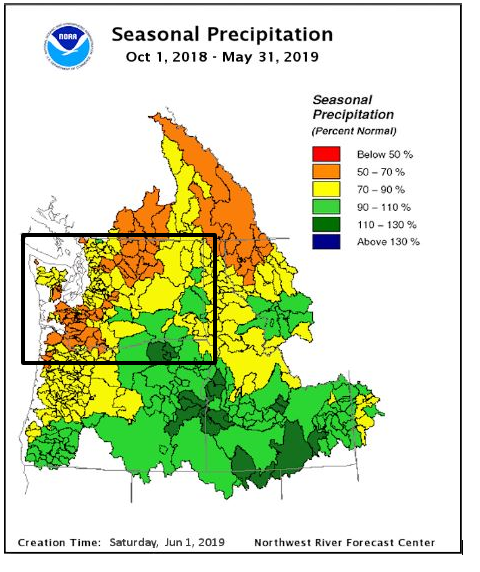 The following table displays the monthly precipitation totals from various regions across the state with the year total listed on the far right of the table. This data was again compiled from AgWeatherNet stations within the regions listed. The map below the table (courtesy of NOAA's Western Regional Climate Center) is a graphical display of 2019 year total precipitation throughout the state. As expected, the Cascades and Olympics have the highest accumulations due to their orographic effects, with eastern Washington being significantly drier due to its residency within the rain shadow of the Cascades. 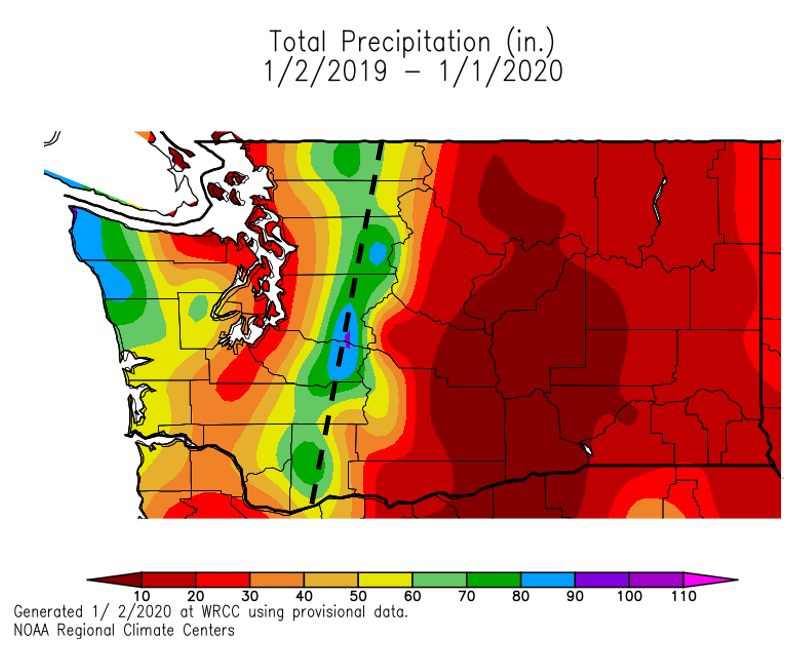 But how does the 2019 year total precipitation compare to climatology? The map below, again courtesy of NOAA's Western Regional Climate Center, displays the 2019 departure as compared to the 30 year (1981-2010) average. Nearly the entire state was short of precipitation in 2019, helping to explain the May 2019 drought conditions briefly mentioned earlier. 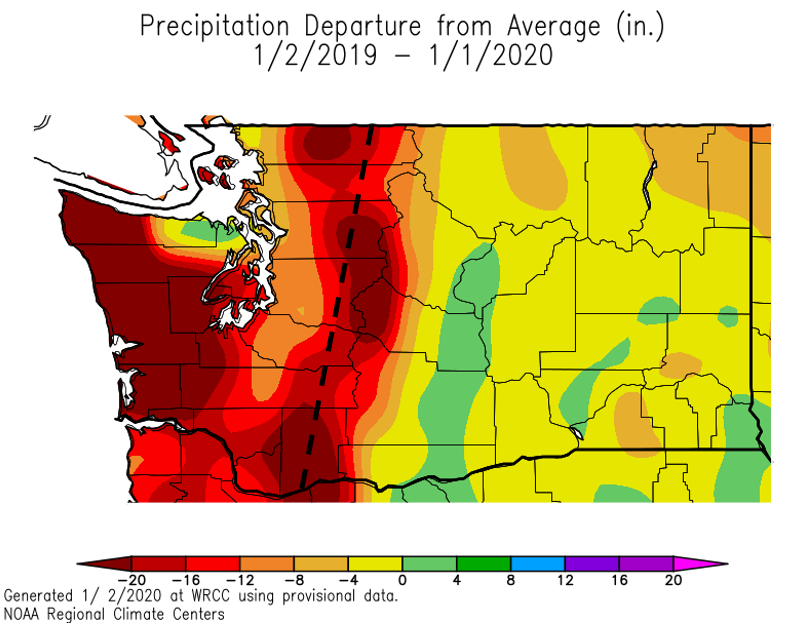 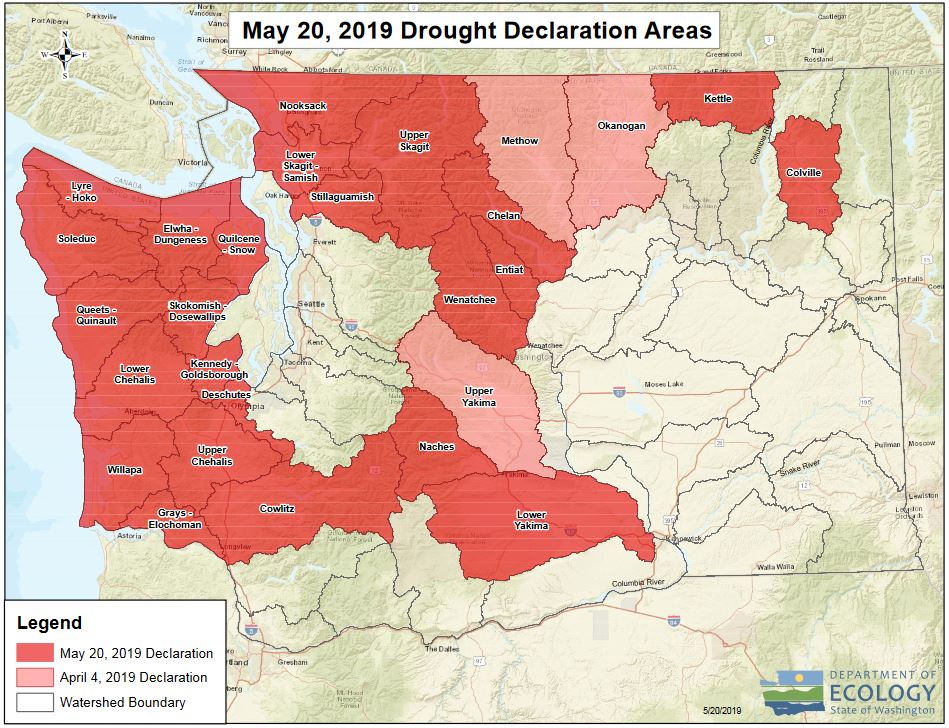 
The following table illustrates the extreme monthly high and low temperatures, 24 hour precipitation (as measured midnight to midnight), and maximum wind gust from various regions across the state. This data was again compiled from AgWeatherNet stations within the regions listed.

As alluded to earlier, one of the most memorable weather events of 2019 was the cold air and snow outbreak of February/early March. This prolonged cold air intrusion was due mainly to a stratospheric warming event that allowed the polar vortex to become split, weaken the jet stream, and meander into more southerly latitudes. The brunt of the arctic air was felt throughout the upper Midwest, however, this arctic intrusion also managed to impact parts of the western U.S. and Canada.

The more noteworthy weather phenomena associated during the roughly month-long cold air intrusion include substantial low land snow events throughout the state. The February 8-9 blizzard managed to shut down many highways and pass routes throughout the state due to large accumulations and drifting snow. Wind gusts of up to 80 mph were recorded at some locales. The Yakima Valley suffered a loss of approximately 1800 dairy cows killed by the storm, a loss of about $3.2 million according to the Washington State Dairy Federation. The Hanford site recorded 25.3" of snow which is a record since record keeping began here in 1945, surpassing the record of 22.7" for February set in 1950 (NWS Pendleton). Spokane experienced its second snowiest February on record at 29.8", with the top record being 39.6" measured in February 1893 (NWS Spokane).

No part of Washington escaped the wintery conditions, including lowland parts of western Washington that are unaccustomed to significant snowfall. Snow totals for the month of February show that Seattle recorded 20.2" of snow at Sea-Tac which makes it the snowiest February on record and 4th snowiest month recorded in the 75-year record at Sea-Tac (NOAA National Centers for Environmental Information, National Climate Report  Annual 2019). Other areas around Puget Sound and the surrounding regions received 3-4+ feet of snow including the foothills near Sequim and North Bend. The heavy snow not only disrupted travel but also caused widespread power outages from falling tree branches.

After a quick temperature recovery through the remainder of March, the rest of the spring and summer turned out near average weather wise. A stretch of hot weather at the beginning of August is notable for eastern Washington, but this doesn't quite come within range of record-breaking high temperatures. Also, summertime thunderstorm activity managed to create a few cases of localized flooding, but nothing on a large scale.

Autumn was relatively benign for the most part, but one notable period for eastern Washington in particular was a stretch of rain, snow showers, and unseasonably cold weather from late-September through mid-October that disrupted the fall harvest. One of the most unusual events from this period was 3.3" of snow that fell in Spokane on September 28-29, making 2019 the snowiest September on record in Spokane and the first September snowfall recorded since 1926. A number of record cold temperatures were also set on September 29th at Pullman, Wenatchee, Spokane, and Omak. Otherwise, a drier than normal autumn was also observed throughout Washington with few major weather events. Seattle only recorded 1.71" of rain in November, making it the driest November since 1976.

The next truly noteworthy weather event that took place was the prolonged rainfall experienced on the western side of the state due to an atmospheric river. Sea-Tac recorded 3.25" of rain on December 20, making it the 5th wettest day on record, with 5.02" received on October 20th 2003 holding the number one spot with records since 1945. The Chehalis, Skykomish, and the South Fork Stillaguamish rivers all had flood warnings issued with minor to moderate flooding forecasted. There were also several mudslides throughout the area, notably the Des Moines and Tacoma areas where a mudslide even covered an Amtrak line near Tacoma (NWS Seattle).

Agriculture Report
Growing Degree Days:
The following tables illustrate the number of base 50 growing degree days (GDD) accumulated through 2019. This data was again compiled from AgWeatherNet stations within the regions listed and calculated via the AgWeatherNet webpage. Even with the cold weather experienced in February and the beginning of March, growing degree days for the year 2019 fell very near average for base 50 GDD.

As seen in the example graph taken from the Tri-cities region (Pasco), base 50 GDD were arguably slightly below average through the month of March, but as seen, quickly recovered through April and May. This put the region 166 GDD ahead of the average by the middle of June. From mid-June and on, base 50 GDD accumulated slightly slower and closer to the average rate with degree days floating either just above or just below the average through the end of the season in most cases. 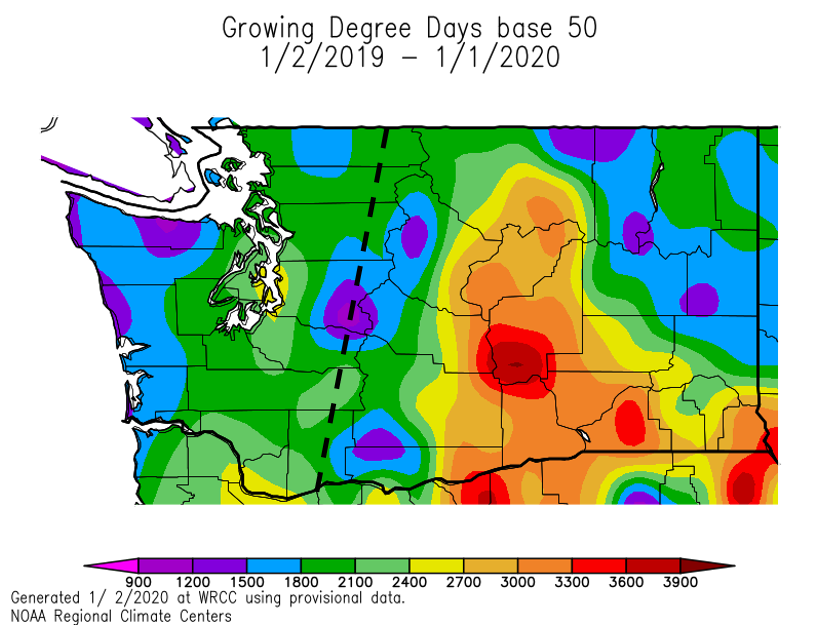 The following map, again courtesy of NOAA's Western Regional Climate Center, provides an overview of base 40 GDD across Washington State. 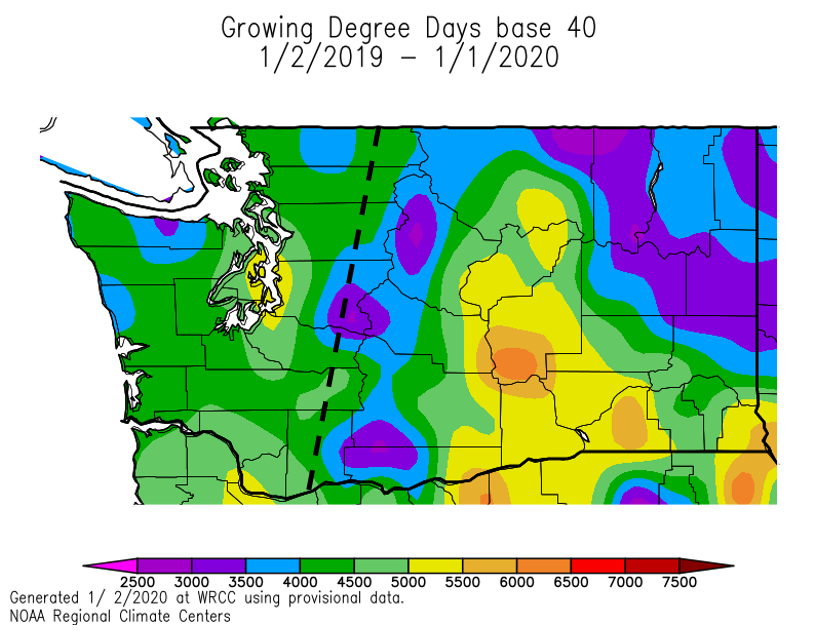 If a general statement had to be made, one might characterize the 2019 growing season as a little shorter than usual. The season got off to a late start, followed by a quick recovery through late spring and tracking near average over the summer. Then a slightly earlier end of the season was apparent through the beginning of autumn.


Lastly, a table is presented summing the 2019 total production of some of the main agricultural products for the state of Washington. The data available at the time of this writing is marginal since we are just beyond 2019, but worthwhile conclusions can still be inferred where the data set is not complete. More data will be added to the USDA National Agricultural Statistics Service for the year 2019 in the coming months. This information can be found following the link here. Data pertaining to crops not presented in the brief table below can also be found on the USDA site by following the previous link.