At long last, Washington finds itself in the midst of an extended period of wintry weather. Although recent and upcoming conditions are not unprecedented in a historical sense, the current spell of colder and at times snowy weather likely seems very unusual given the mild winters of late.

In any case, the best is yet to come. After snowfall for some folks on Wednesday night, the critical story will be the bitter cold for Friday through Sunday.

Beginning later today (Wednesday; 12-14-16), a storm approaching from the south is expected to bring snowfall to southern parts of Washington. There may be a sharp north-south gradient between minimal or no snowfall and accumulating snowfall, but areas near the Oregon border could receive significant accumulations of 6+ inches. While the northern half of the state may stay mostly dry, places like Yakima and Pullman are a tough call, and could be on the border of lighter and heavier amounts. For such locations, the potential exists for anywhere from very little to significant accumulations; but right now, light to moderate accumulations of several inches are anticipated.

The southern Washington snowfall should be the result of a fascinating and uncommon meteorological squeeze play, as warmer, moist air to the south collides with colder, drier air to the north. As we have discussed in previous posts, it is difficult to have a single storm or air mass with all of the factors needed for accumulating lowland snowfall. Currently, there is a favorable atmospheric setup consisting of upper level winds coming from the southwest, and lower level winds coming from the northeast, which allows for moist, warm air and cold, dry air to meet.

In fact, this situation is enhanced further by a rare type of split flow setup. Normally, split flow causes uneventful weather for us. In this case, however, two distinct jet streaks (river-like regions of strong upper level winds) are actually meeting in the Northwest. Rather than relying upon one single air flow direction, we can utilize converging components from different air masses to create a snowy day. In other words, air flow from the Pacific Ocean supplies the moisture, and air flow from Canada provides the cold air. Please see the figure below (courtesy of San Jose State University) for a representation of this pattern. This map of the upper level air flow (about 18,000 feet) from yesterday (Tuesday) evening shows a southwesterly air flow from the Pacific Ocean encountering a northerly air flow from Canada over Washington. 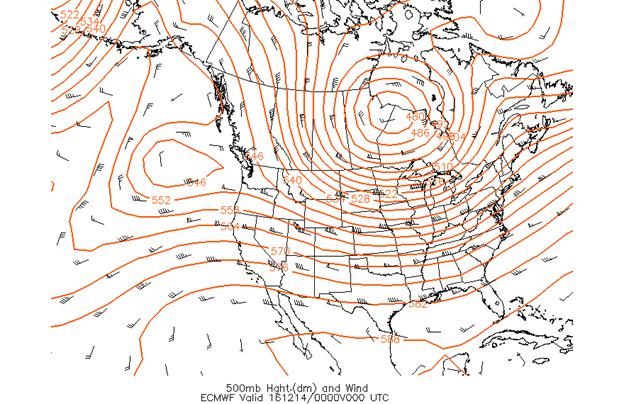 Following tonight's storm will be round two of the winter weather: a surge of the coldest air of the season. Given widespread snow cover east of the Cascades, some areas may experience their lowest temperatures in several years. Saturday morning looks to be particularly chilly, with certain cold locations falling into single digits above or below zero, and possibly as low as -10 degrees. Daytime high temperatures should only reach the teens in many eastern spots. Even western Washington may see high temperatures only in the mid 20s to 30s, with lows as cold as the upper teens. For snow covered locations, the coldest low temperatures would occur under clear skies, light winds, and stable conditions.

1. Snow arriving later today, with potentially heavy accumulations along the Oregon border (east of the Cascades), but very little or none in northern areas, and a potentially sharp north-south gradient in snow amounts over southern or central Washington

2. Bitter cold arriving on Friday, and lingering through Sunday in the east

3. The coldest period should be around Saturday, with lows east of the Cascades in the single digits (above or below zero), and highs in the teens

4. The very coldest lows and highs could be around -10 and 10 degrees, respectively

Milder conditions are likely for next week; but until then, there is still plenty of winter weather to come. Please be safe, and feel free to contact me (Nic Loyd, nicholas.loyd@wsu.edu) with questions or concerns.